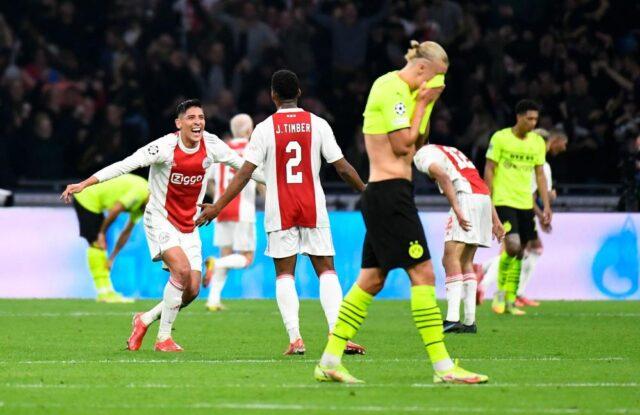 Borussia Dortmund suffered a disappointing loss to Ajax Amsterdam on Tuesday night as they were beaten away from home.

The German side shipped in four goals without scoring any as they dropped to the second position on the Champions League table.

Dortmund went into the game level on points with Ajax after two games played in the UEFA Champions League, beating Besiktas and Sporting CP respectively.

However, despite the inclusion of Erling Braut Haaland in the starting lineup, Marco Rose’s side were far from their usual best as they succumbed to defeat.

A Marco Reus own goal after just 11 minutes into the game, got things started at the Johan Cruijff Arena.

Daley Blind scored the second of the game 14 minutes later, jumping unto a pass from Sebastian Haller to double the home side’s lead.

Borussia Dortmund’s reaction after the first two goals was far from convincing with Rose’s men playing without any cohesion.

The Black and Yellows only managed one shot on target in the first half as compared to Ajax’s four in the same period.

After the recess, Dortmund didn’t see much of the ball and despite improving their attempts at goal, it was the Netherlands outfit who went on to add to their goal tally.

Haller provided the assist once again, this time setting up Brazil’s Antony to make it 3-0 in the 57th minute of the game.

Blind returned Haller’s favour in the 72nd minute, assisting the Ivory Coast international to worsen the woes of Dortmund.

Norway international, Haaland had three shots on target but none of his efforts trobled goalkeeper, Remko Pasveer as he kept his second clean sheet of this season’s Champions League tournament.