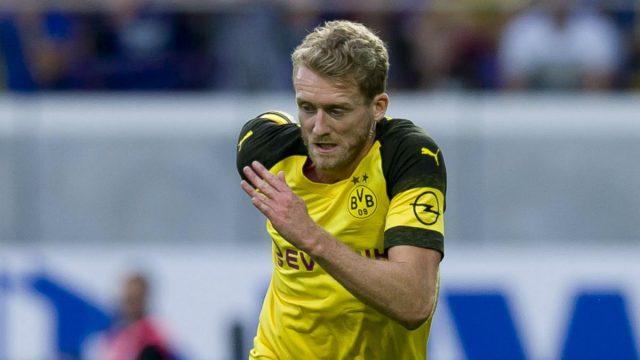 Borussia Dortmund’s German star, André Schürrle, is set to have his contract terminated at the club. Schürrle joined the club in the 2016/17 summer transfer window. He signed for 30 million Euros from Wolfsburg but unfortunately wasn’t able to live up to the expectations and hype built around the price-tag.

In his 51 appearances for the Black and Yellows, he has scored 8 goals and assisted 10 times. This didn’t help his case for when Lucien Favre took over as manager of the club in 2018. André Schürrle was immediately loaned for the 2018/19 season to English Premier League side, Fulham. He had a decent season with the London-based club, scoring 6 goals in 24 Premier League appearances.

However, upon the side’s relegation to the EFL Championship, Schürrle had no desire to extend his stay at the club. He was greeted back to Dortmund with fierce competition for his place. The club had just signed Julian Brandt and Thorgan Hazard, who had far better seasons in comparison to André Schürrle. Further, the return of Marco Reus did not help Schürrle’s case for a place in the squad.

So he spent another season on loan. This time at Spartak Moscow. His season was well below average though, managing only 1 goal and 2 assists in his 13 appearances for the Russian side. Spartak Moscow has shown no interest in extending a loan deal or making a permanent deal for André Schürrle.

Borussia Dortmund has recently confirmed that Schürrle’s existing contract, which was due to expire in 2021, will be terminated. The club released in a statement, “Borussia Dortmund and professional footballer André Schürrle, who has recently been on loan at Russian top-flight outfit Spartak Moscow, have agreed to mutually terminate the player’s contract, which was originally set to run until 2021.”

André Schürrle, on reflection of his time at Dortmund, said, “On reflection, it was a period with highs and lows – but also with many valuable experiences both on a sporting and, in particular, on a personal level. I would like to thank those responsible at BVB and wish the club and its special fans all the best for the future.“