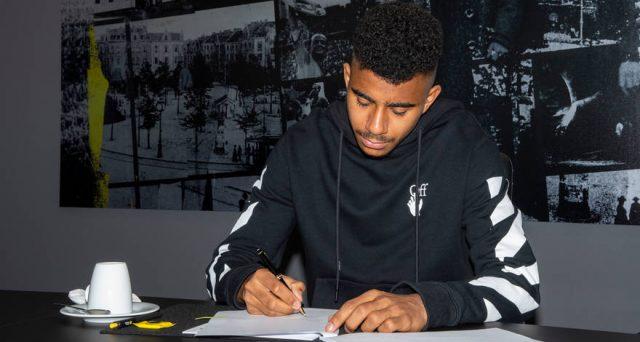 18-year-old Ansgar Knauff has signed his first professional with Borussia Dortmund, keeping him at the club until 2023 at least. Knauff joined the Dortmund youth setup in 2016, in a transfer from Hannover 96’s youth team.

His development under the youth setup caused the senior team’s manager, Lucien Favre, to take him on the pre-season training camp. Knauff appeared in 2 games during the pre-season. The first being a start against Austria Wien, followed by a substitute appearance against MSV Duisburg, where he scored twice.

His impressive display earner him a call-up to the Borussia Dortmund II side for whom he has appeared 6 times in the Regionalliga and scored in the 5-1 thumping against rival Schalke 04 II.

Upon signing the 3-year deal, Knauff expressed his delight. He said, “I’m convinced that I can develop very well here. I’ll continue to give everything to achieve my goal of playing for BVB’s Bundesliga team.”

Borussia Dortmund and Ansgar Knauff have agreed on a professional contract extension until 2023! ✍️ pic.twitter.com/7hCHodebTD

His dream of playing for the senior team is not far away, given his development and the team’s belief in youth.

Youssoufa Moukoko, who recently turned 16, has already been promoted to the senior team. Knauff should look to him for inspiration to accomplish the goals he wishes to. Other examples of youth excelling at Dortmund are Giovanni Reyna, Jadon Sancho, Christian Pulisic.

Knauff is a forward who is known for pace and acceleration. Youth Coordinator, Lars Ricken said, “His acceleration and his speed are outstanding, but he is also tricky on the ball and has good finishing qualities.”

He has appeared in the matchday squad for the Dortmund senior side on 3 occasions, twice in the UEFA Champions League and once in the Bundesliga. Although unutilized, it is still an encouraging sign of what it is to come.