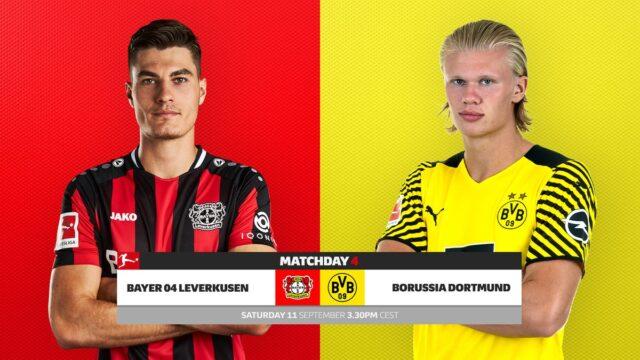 Bayer Leverkusen will be the fourth league test for Borussia Dortmund over the weekend as club football resumes.

Dortmund have an all-important clash against Leverkusen on Saturday at the Bay Arena, with Marco Rose’s side looking to better their performance as compared to the ones they did earlier on.

After three games, BVB have six points having lost their second game of the season to SC Freiburg. The Black and Yellows are aware a win on Saturday will be a huge statement to fight for the Bundesliga title this season.

Leverkusen are in a rich vein of form after the first three games. The only game they dropped points was the 1-1 draw with Union Berlin away from home on the opening weekend. Leverkusen has till now scored nine league goals in three matches while Dortmund have also netted the same number in the opening three league games.

However, the Rose will have to work on Dortmund’s defensive unit if they are to good themselves a good account against Gerardo Seoane’s men.

Leverkusen have a few key players unavailable for Saturday’s clash. Exequiel Palacios and Charles Aranguiz are set to miss out on the game due to the timing of the South American World Cup qualifiers. Timothy Fosu Mensah, Lucas Alario, Edmond Tapsoba, Karim Bellarabi, and Julian Baumgartinger are also on the sidelines ruling them out of the game.

For the away side, Mats Hummels is back in team training and should be given the nod at centre-back over the weekend. Marco Reus having picked up a discomfort while with the Germany squad is expected to be fir in time but Gio Reyna has been ruled out until next month after picking up an injury while on international duty. New signing Marin Pongracic could come in at right-back for Dortmund with Julian Brandt also likely to be given a start.