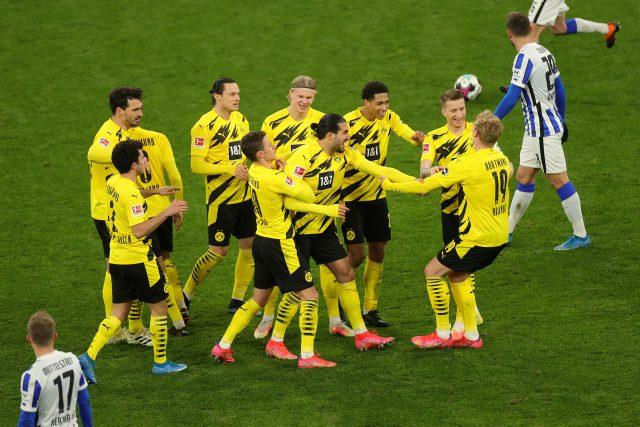 Borussia Dortmund staged a good fight in their quest to make it to the top four spots on the Bundesliga Liga table on Saturday.

The Black and Yellow lads defeated Hertha Berlin at the Signal Iduna Park thanks to second-half goals from Julian Brandt and Youssoufa Moukoko.

Hertha were hoping to add to their latest victory in the league when they visited Dortmund but Edin Terzic’s side had other ideas, as they piled more misery on the away team.

Brandt opened the scoring with a sumptuous strike from outside the penalty box after receiving a pass from Marco Reus in the 54th minute.

The captain of the side was forced off the pitch minutes later after the late challenge from Vladimir Darida, the Hertha player being sent off afterward.

Moukoko came in for the Germany international and looked a threat from the very moment he was introduced. The 16-year-old almost set up Giovanni Reyna for the second goal of the game but the USA international’s sliding effort came off the post.

In the first minute of the injury time, the Cameroonian-born German sealed all three points for his side, striking the ball through the legs of Rune Jarstein in goal for the away side.

The youngster now has three league goals to his name this season from 13 appearances.

Dortmund now occupies the fifth position, just a point behind Eintracht Frankfurt who lies fourth and have a game in hand to play.