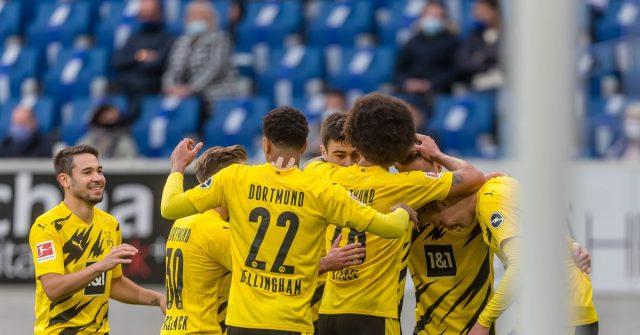 Borussia Dortmund endured a frustrating afternoon in the Bundesliga match-day 21 against Hoffenheim on Saturday.

Playing at home at the Signal Iduna Park, Dortmund had their top two assets Jadon Sancho and Erling Braut Haaland scoring for them to settle for a 2-2 draw.

In what was Edin Terzic’s 11th game in charge of the Black and Yellows they were lucky enough not to have walked away with a defeat.

Raphael Guerreiro assisted Sancho in the 24th minute to open the scoring after dominating the early stages of the game but the away side was not down for so long as Munas Dabbur equalised for them 15 minutes before halftime.

Dortmund was far from their best performance after the recess and was punished for a loss of focus in the 51st minute-mark, with Hoffenheim raking the lead through Ihlas Bebou.

In an attempt to chase for an equaliser, Dortmund was forced into making quick substitutions with the likes of Marco Reus, Mahmoud Dahoud and Youssoufa Moukoko all coming into the game.

Prior to that, forward Haaland had seen a goal ruled out by the Video Assistant Referee, and his side were still pushing for the leveler.

With nine minutes left until the full time, the Norway international scored the 15th league goal of the 2020/21 season, pouncing on a defensive error by Hoffenheim.

Dortmund remains sixth on the league log with a UEFA Champions League game against Sevilla next in line.