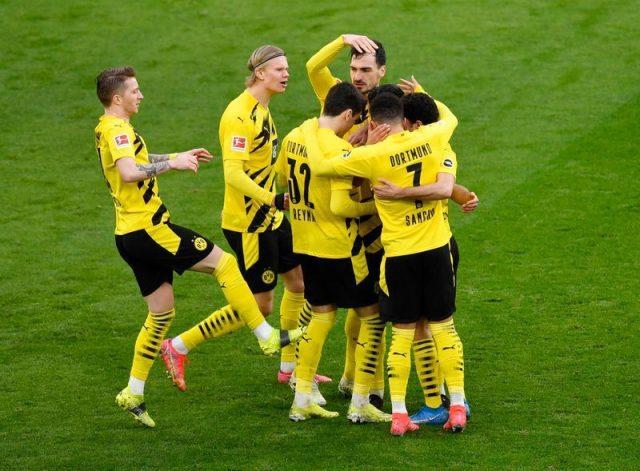 Borussia Dortmund made light work of Arminia Bielefeld on Saturday during their Bundesliga clash.

The Black and Yellows were victors on the day, winning by three goals to nil – Mahmoud Dahoud, Jadon Sancho and Reinier Jesus were all on the scoresheet for the home.

Despite creating so many chances in the opening 45 minutes, both teams went into the break with no goal separating them, but the recess proved to be a good one for Dortmund.

Dahoud opened the scoring after just three minutes into the second half, finishing off from Sancho’s pass into his path.

The English man was next on the scoreboard as he doubled the lead of Edin Terzic’s side. The 20-year-old converted from the penalty box in the 58th minute after Marco Reus was brought down in the box.

Dortmund continued to press for their third on the night and were rewarded when substitute Reinier Jesus tucked in from Erling Braut Haaland to seal the victory with 10 minutes to go until full time.

The win now means that Dortmund have recorded their third straight victory in the Bundesliga and will now look forward to locking horns with Sevilla in their next game.