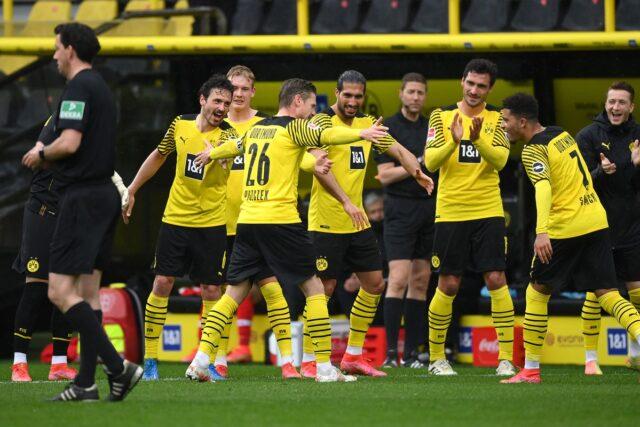 A befitting game for Borussia Dortmund to end their 2020/21 season following their 2-1 victory over Bayer Leverkusen on the final day of the German season.

Erling Braut Haaland and Marco Reus were on the scoresheet for the home side as Lars Bender scored later in the second half to give the away side a consolation goal.

The game was also the last game of veteran defender Lukasz Piszczek who had been at the Signal Iduna Park since joining the club from Zaglebie Lubin in 2010.

Nico Schulz, Reinier Jesus and Julian Brandt were all
handed starting berth by coach Edin Terzic in the last league game of the season having played very little in the last few games.

Haaland opened the scoring for the Black and Yellow lads in the fifth minute of the game when Dortmund capitalised on a poor passing at the back by Leverkusen, with Norway international netting his 40th goal of the season.

Dortmund went into the break with just that lead and looked certain to have cemented their place in the third position slot.

Terzic was forced to introduce Jude Bellingham into the game after Mahmoud Dahoud picked up an injury prior to the end of the first 45 minutes.

Reus doubled the home side’s lead after 51 minutes, hitting the ball into the net directly from a free-kick at the edge of the 18-yard box.

Felix Passlack and Giovanni Reyna were also brought on in place of Piszczek and Reinier respectively around the 74th minutes.

Haaland recorded his 27th league with nine minutes to go until full time. The striker once again utilised a mistake by the away team’s defense to score his second goal on the night.

BVB finishes the season with 64 points, a whopping 14 points off Bayern Munich who were once again crowned champions.