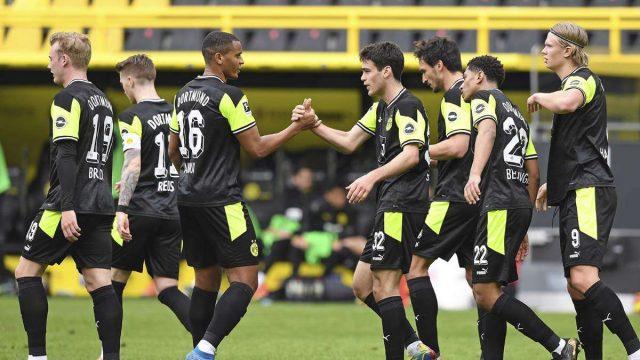 Erling Braut Haaland returned to the scoresheet over the weekend as Borussia Dortmund secured all-important three points against Werder Bremen at the Signal Iduna Park.

The Black and Yellows lads came from a goal down to beat Bremen with a 4-1 scoreline as they boosted their chances of qualifying for next season’s UEFA Champions League.

Prior to the games over the weekend, Dortmund had suffered a 4-2 aggregate defeat to Manchester City to bow out of the European competition and hence needed a win to spark a better end to the season.

Milot Rashica opened the scoring for the away side after 14 minutes but youngster Giovanni Reyna was on hand to draw parity for Edin Terzic’s men.

Haaland then took the show upon himself before the half-time whistle, scoring two goals in the space of four minutes to give the home side a two-goal lead.

Bremen had all attempts to get back into the game but were unable to take their chances after the break.

In the 87th minute, Mats Hummels didn’t pass on the chance to extend his side’s leading, slotting home the fourth on the night for Dortmund to make it 4-1.

They now find themselves four points behind fourth-placed Eintracht Frankfurt who lost over the weekend to Borussia Mönchengladbach.