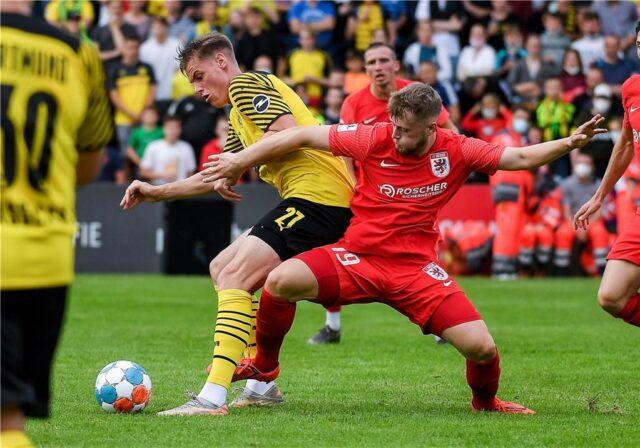 Borussia Dortmund kicked off their 2021/22 pre-season campaign with a 2-0 win over FC Giessen on Tuesday.

The win also kickstarts a new era at the Signal Iduna Park with Marco Rose bow assuming the role as the manager of the club.

The former Borussia Monchengladbach boss saw his first game as Dortmund boss as his side recorded a comfortable win over their opponents.

Youngsters Ansgar Knauff and Steffen Tigges scored the goals for the Black and Yellow lads who defeated the German fourth-tier side on Tuesday.

Rose named a strong starting lineup for his first game with the likes of Marco Reus, Julian Brandt, and Mahmoud Dahoud all making the XI.

Struggling in the opening stages of the game, Dortmund found their feet in the 34th minute with Knauff breaking the deadlock, turning Brandt’s low cross into the net.

It didn’t take long to double their lead with Tigges scoring on the stroke of halftime as the Bundesliga side cruised into the break with a two-goal lead.

Brandt looked by far the best player on the pitch for the first 45 minutes, orchestrating Dortmund’s transition from defence to attack while also creating some good chances.

Though the game may have been played against a lower tier side, Rose will definitely have gathered quite a number of positives from his first game in charge of the club.