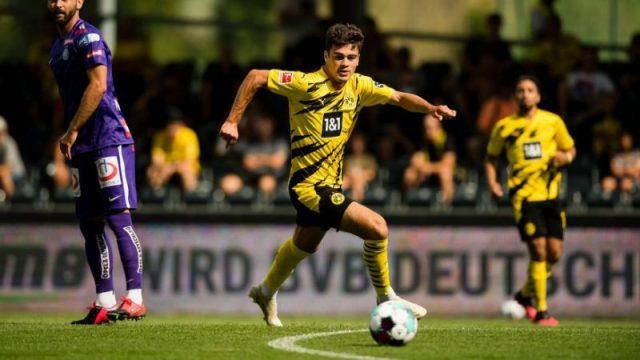 Borussia Dortmund’s reunion with their former manager, Peter Stoger, did not go according to plan for the Austrian manager and his team. The Black and Yellow army showed no sympathy for their former manager’s team, as they thrashed Austria Wien 11-2 in the course of the 90 minutes.

Dortmund started the game in spectacular fashion, creating a flurry of chances for themselves. They took the lead in the 9th minute thanks to the “American Dream”, Giovanni Reyna, who finished from close range after a spectacular one-two between him and Raphael Guerreiro.

Reyna doubled BVB’s lead in less than 15 minutes when Manuel Akanji played a clever backheel into Reyna’s path. The American then slotted the ball into the net, making it his third goal in pre-season so far.

Austria Wien then crept back into the game and reduced the deficit by 1 thanks to a brilliant towering header from Christoph Mondschein. It didn’t take Dortmund long to respond though as they scored two more before the break. The goals came through Raphael Guerreiro who finished elegantly when played through on goal by Ansgar Knauff, and Immanuel Pherai who calmly finished from close-range.

Dortmund fielded an entirely different starting eleven in the second half which meant that the players on the field were fresh and raring to go. The players’ freshness became more obvious as the half progressed.

Jadon Sancho extended Dortmund’s lead to 5-1 after a spectacular pick out by Emre Can. Sancho then tricked the keeper and directed his shot towards the near post from the centre of the box. Just a minute later, Wien hit back through a sublime long-range effort from Aleksander Jukic.

Jadon Sancho and Emre Can combined again to restore Dortmund’s four-goal lead. This time Sancho turned provider and Can the goalscorer with a powerful header from a pinpoint corner delivered by Sancho.

Emre wasn’t satisfied enough with 1 assist and 1 goal to his name though, as he found Marius Wolf right next to the goal-line just 8 minutes after his thumping header.

The last 15 minutes of the game was far too easy for Dortmund as they scored 4 goals in that time period. The first of the 4 coming through a Thorgan Hazard spot-kick, his second in two games. Dortmund’s eighth goal surely sent Manchester United fans into a rage, as the English club’s targets Jude Bellingham and Jadon Sancho combined, with the former dinking the ball over Wien’s keeper.

The last goal to cap a fantastic performance by Lucien Favre’s men came through Nico Schulz, whose volley was fumbled by Wien’s goalkeeper and crept over the line.