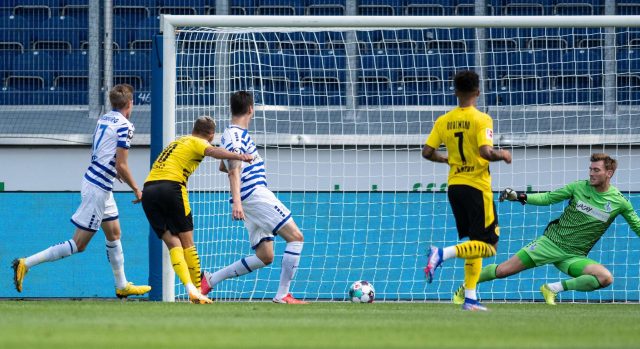 Borussia Dortmund’s performances in the Cup of Traditions was a mixed bag. The Cup of Traditions is an annual pre-season tournament conducted between three European footballing teams. This year’s participants were BVB, Feyenoord Rotterdam, and MSV Duisburg. The games conducted were 60 minutes each.

Dortmund’s first game in the Cup of Traditions went incredibly well. The club smashed their opponents, MSV Duisburg 5-1. The club is set to meet the German side again on the 13th of September in the DFB-Pokal first round. The game gave the black and yellows a good idea of what they come up against in 20 days.

The return of Mats Hummels, who recovered from the foot injury he picked up on vacation boosted Dortmund. The game was rather easy for Dortmund as they trampled over their opponents with ease. The goals came through Giovanni Reyna, Thorgan Hazard, Jadon Sancho, and Ansgar Knauff who scored twice.

The “American Dream”, Giovanni Reyna, opened the scoring with a calm finish, making his start to pre-season even better. In the very next minute, Dortmund extended their lead to 2-0 thanks to Thorgan Hazard, who was left alone in the middle of the box and slotted the ball into the back of the net.

Dortmund’s next goal came through Jadon Sancho’s individual brilliance. The Englishman’s ball retention and dribbling ability helped him cut in from the left, skip past Duisburg’s defenders and then finish. Just before the 30-minute mark, Duisburg got a goal back owing to an error from Marwin Hitz. The goalkeeper’s poor touch let him down and gifted the ball to Ahmet Engin, who finished with ease.

Dortmund scored two goals in the last 11 minutes of the game. Both goals came through Ansgar Knauff. Knauff has had a couple of impressive displays in pre-season with this game being the hallmark. The 18-year-old’s incredible first touch and finessed shot helped him make the most of Thomas Delaney’s chipped ball. This gave Dortmund their fourth goal. Knauff’s second goal came with a stroke of luck. Manuel Akanji’s brilliant free-kick rebounded off the woodwork and fell straight into Knauff’s path, and he passed the ball into the goal.

If Duisburg’s performance from tonight is something to base the outcome of the DFB-Pokal first round on, then Dortmund should comfortably win even with a weakened side.