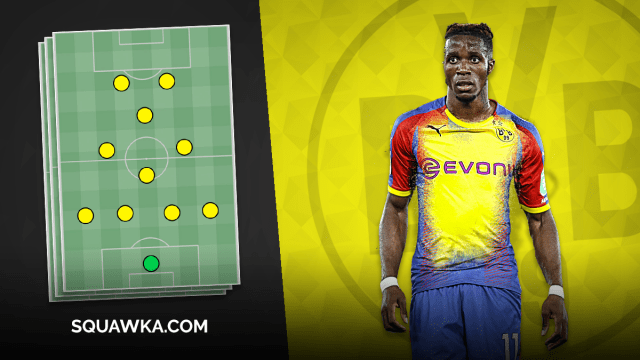 Remember the links from 2019 linking Crystal Palace’s Wilfried Zaha to Borussia Dortmund? They’re back. Sky Sports have reported that BVB is interested in the Ivory Coast forward. Zaha is often regarded to be too good for a team like Crystal Palace, and certain performances that he has delivered have definitely strengthened that claim.

One of the major reasons the links between BVB and Zaha have reappeared is the fear of losing Jadon Sancho to Manchester United. However, Michael Zorc and Hans-Joachim Watzke, the club’s Managing Director and CEO respectively, have repeatedly stated that Sancho will stay at Dortmund for the 2020/21 season.

Zorc said, “We plan on having Jadon Sancho in our team this season. The decision is final. I think that answers all our questions.”

Watzke said, “For a Westphalian, definite means definite. Jadon will play with us for the 2020-21 season. There is no room for interpretation.”

If this is the case, where are the links coming from? If Sancho stays at Dortmund, there is no room for a player like Zaha in the starting eleven. Dortmund are already equipped with the likes of Thorgan Hazard, Giovanni Reyna, Julian Brandt, Marco Reus, Jude Bellingham, and now Reinier Jesus in the attacking midfield and wide forward spots.

In his 362 appearances for Crystal Palace, Zaha has scored 57 times and assisted 70 goals. These are above-average numbers for a mid-table Premier League club, and Zaha often saves his club from the depths. This doesn’t make the transfer more likely though as Zaha’s contract is valid until 2023. This means that he will be valued extremely high (£50M+), a price which Dortmund cannot afford in the current climate.