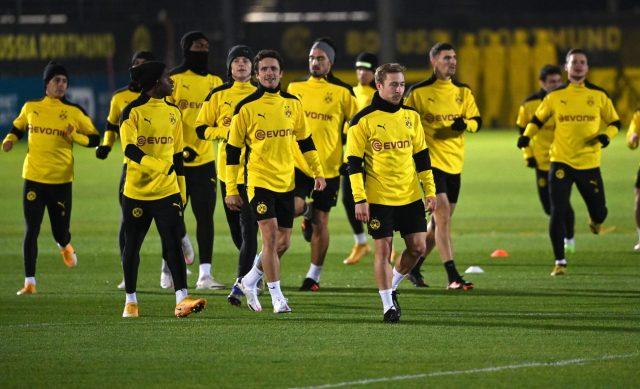 After a shocking defeat to Cologne last weekend, Borussia Dortmund will be hoping to bounce back to victory when they are hosted by Eintracht Frankfurt on Saturday.

A win for the away side could help them close the gap on the first place considering Bayern Munich and RB Leipzig face off this weekend as well.

Lucien Favre has been dealt a blow with the squad with the news of Erling Braut Haaland’s injury and he would need to find a new strike force in the absence of the Norway international.

Here is how Dortmund are likely to lineup for the game against Adolf Hutter’s Frankfurt on Saturday:

For all his good performances this season so far, it will be surprising not to see Burki in goal for the Black and Yellows on Saturday. He will be hoping for a win this time.

Dan-Axel Zagadou was named on the bench during the Champions League game against Lazio on Wednesday but with Mats Hummels unlikely to be risked, Zagadou could come in to form a three-man defence together with Manuel Akanji and Emre Can.

While Mateu Morey and Raphael Guerreiro will be expected to operate in the wing-back roles, Jude Bellingham and Axel Witsel will also look to keep the ball and break down attacks from the opposition in the middle of the park.

Marco Reus is expected to replace Haaland as he did in midweek and that will also mean Jadon Sancho and Thorgan Hazard will have to be very effective from the wings to create chances for the Germany international. Reus will play the ‘false 9’ role and this will not be his first time doing so.