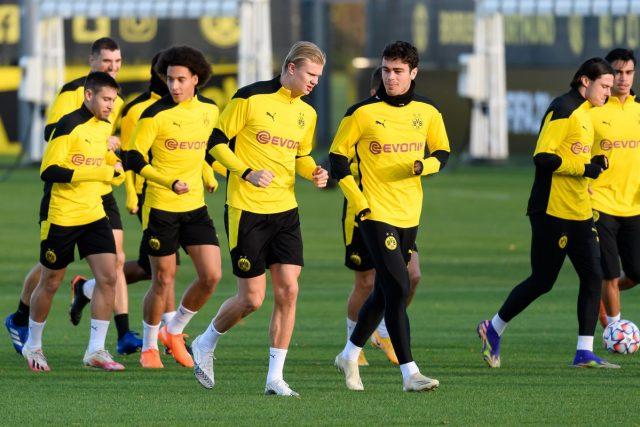 Borussia Dortmund will play host to FC Cologne in the German Bundesliga on Saturday afternoon at the Signal Iduna Park.

At the moment, everything seems to be going the way of the Yellow and Blacks since their defeat to Bayern Munich and the weekend will be another chance for them to continue their streak.

The likes of Jadon Sancho, Erling Haaland and Giovanni Reyna are getting to express themselves on the pitch as they would want to have and have got the club in the right direction.

Their good performances only mean thing for Lucien Favre – that is, a selection headache with regards to who to pick and when and who to leave on the bench.

Other than the three of Dan-Axel Zagadou, Marcel Schmelzer and Reinier Jesus, Favre has everyone available at his disposal for the game on Saturday.

So here is how we think Dortmund could lineup against FC Koln:

Burki would hope for a better performance on Saturday rather than the one he had against Hertha Berlin. A clean sheet would be a good game for him.

Guerreiro should be able to recover in time for this weekend’s game after a minor injury sustained in midweek. He will start alongside Meunier who has been solid since moving to Germany.

With the away side likely to see less of the ball, Favre would opt for a back four and that would mean a start of Akanji and Hummels at the heart of defence.

The pair have played so well to complement each other during their games together and Favre seems to have found his perfect midfield partnership. They will be expected dictate the pace of the game while breaking down attacks from the opposition.

We could see the fantastic front four in action this weekend for Dortmund at the Signal Iduna Park. Reus is likely to start alongside the three youngsters in Reyna, Sancho and Haaland – and that could provide the team with a variety of options to attack.