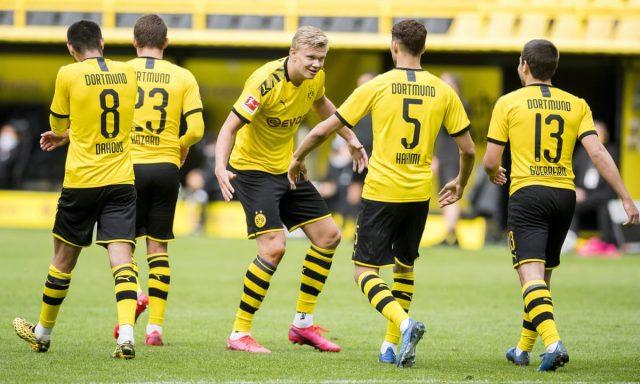 Borussia Dortmund are a step away from securing qualification into the next round of the UEFA Champions League and could be presented with such opportunity on Wednesday against Lazio.

The Italian giants are just a point behind Dortmund after four games played and a win over the Bundesliga side will also see them pip them to the top spot.

Lucien Favre has a lot to think about going into the game following the availability of almost all of his arsenals except for Marcel Schmelzer and Reinier Jesus.

Here is how we think the Black and Yellows could lineup for the clash against Simone Inzaghi’s men:

It would be no surprise to see the Switzerland international in post on Wednesday as he takes as the role as the club’s first choice goalkeeper.

Thomas Meunier and Raphael Guerreiro will be handed with the role of playing on both flanks in defence meaning that the team is likely to return to a back four.

With this game too early for Dan-Axel Zagadou to start, Manuel Akanji and Mats Hummels will continue their partnership at the heart of defence.

The England international is expected to return to the starting lineup on Wednesday after bring given a rest in the 1-2 loss to Cologne. He will pair with Axel Witsel and try to give balance to the team.

This has proved to be Dortmund’s best attacking four although Marco Reus gives the team a lot of options. Haaland will also be looking to add to his tally in the competition and three behind him will be there to create chances.