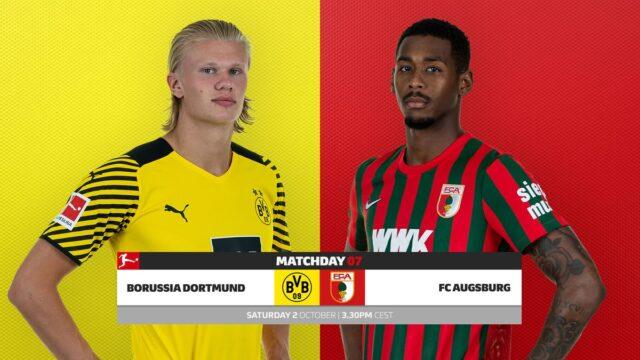 The Black and Yellows are looking to overcome the defeat to Borussia Monchengladbach last weekend when they suffered a 0-1 loss to Adolf Hutter’s men.

The Signal Iduna Park hosted the Champions League game between Dortmund and Sporting CP in midweek, a game which was won by Donyell Malen’s first goal for the Black and Yellows.

Augsburg on the other hand has not had the best of starts to the 2021/22 Bundesliga season. The club has just one win in six games played, losing three and drawing the other two.

Markus Weinzierl’s men have been far from their best and need to sort themselves out earlier before things get messy midway through the campaign.

Dortmund dropped to fourth place following the defeat to Monchengladbach as they now find themselves four points behind league leaders Bayern Munich, while Augsburg occupies the 15th position with just five points taken from six games.

Erling Braut Haaland is not expected to be involved in the game after confirming his absence through a social media post. Emer Can and Giovanni Reyna are not expected to be back until after the international break while Soumaila Coulibaly and Mateu Morey are also on the sidelines. The red card last weekend means Mahmoud Dahoud is suspended for the encounter.

For Augsburg, Felix Uduokhai and Alfred Finnbogason are both out with respective injuries, while the trio of Andre Hahn, Iago and Florian Niederlechner are all serious doubts for the clash together with Jan Moravek.