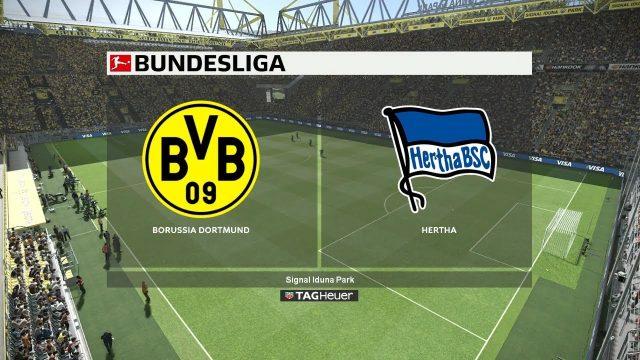 The weekend present another opportunity for Borussia Dortmund to return to Bundesliga action after cruising to a 6-1 over Paderborn in their last game.

Dortmund will come up against Hertha Berlin at the Signal Iduna Park as they look to make the second position a permanent one with the title looking increasingly out of reach.

With just five games to go, the Bundesliga table is shaping up so well and teams are looking to ensure they cement a place in Europe while others battle to avoid the drop.

For Hertha Berlin, it will be the case of trying to book a place for next season’s Europa league and that would mean they overcome the Black and Yellows in the process of doing that.

Tied on 38 points with Freiburg, Berlin find themselves in the ninth place with five points needed to topple Hoffenheim from the second Europa League spot.

Lucien Favre and his team run away with a 2-1 victory the last time they faced Bruno Labbadia’s side, which took place at the Olympiastadon in November last year.

Borussia Dortmund have won four of their last five games in the Bundesliga with the 0-1 loss to Bayern Munich the only defeat. Saturday will be another opportunity to carry on their quest for a second place finish.

Among the goals and among the assists is Englishman Jadon Sancho. The player is readily one to keep an eye on even while being deployed as a false striker. He banged in a hat-trick in Dortmund’s last game and he is likely to be the key problem Hertha Berlin could be struggling to deal with over the weekend.

Labbadia has a huge task up on his head against a Dortmund side who are likely to be without Erling Braut Haaland. Berlin are on a five game unbeaten run and have taken 11 points from a possible 15, which is increasing the chances of finishing in the top six.

Berlin are also yet to win any of their last five encounters with Dortmund as they have three times (D2) during that period.

Matheus Cunha would be an interesting player to keep an eye on for Dortmund. He has scored four goals for the club since his arrival from RB Leipzig in January and his partnership with Krzysztof Piatek has been successful so far.

Erling Haaland is once again expected to miss the clash as he continues to suffer from a knee injury. Sancho should do fine in such position after impressing against Paderborn operating as a false striker.

Dan-Axel Zagadou, Mahmoud Dahoud, Marco Reus and Nico Schulz will all miss out with Mats Hummels also being sidelined due to suspension, having picked up a card last weekend.

For Hertha, Solomon Kalou is suspended by the club and that has ruled him out of the game. Santiago Ascacibar and Marius Wolf are on the treatment table with Matheus Cunha and Marvin Plattenhardt also doubtful due to concussion.