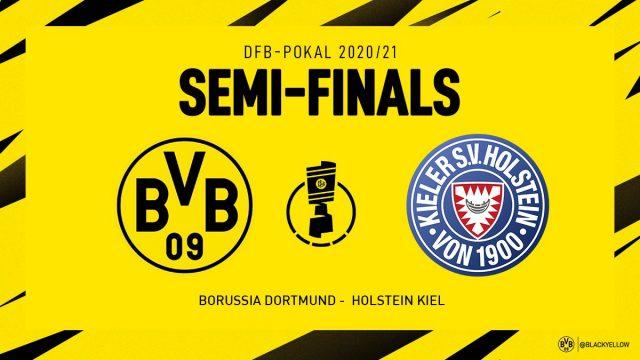 Borussia Dortmund will have the chance to secure a place in the final of the DFB Pokal when they face Holstein Kiel at the Signal Iduna Park on Saturday.

The Black and Yellows have been in great form since their elimination from the UEFA Champions League by Manchester City earlier in the month.

They defeated Borussia Mönchengladbach in the last round before advancing to the semi-final stage whereas Kiel beat Rot Weiss Essen by three goals to nil away from home to set up a clash with Dortmund.

Dortmund and Holstein Kiel last met back in February 2012 where the Black and Yellow lads thumped Kiel by four goals to nil away from home.

Saturday will be another chance for them to seek revenge but Dortmund’s quality obviously supersedes but this season has produced shocking results as well so nothing is ruled out.

Mats Hummels is expected to return to the starting lineup for the game after serving his suspension in the league in the last game. Dan-Axel Zagadou, Marcel Schmelzer, Axel Witsel and Youssoufa Moukoko are all out of the game over the weekend.

For Kiel, goalkeeper Ioannis Gelios has teated positive for coronavirus and will not travel with the squad. Stefan Thesker has also been ruled out of the clash but everyone else is available for selection.