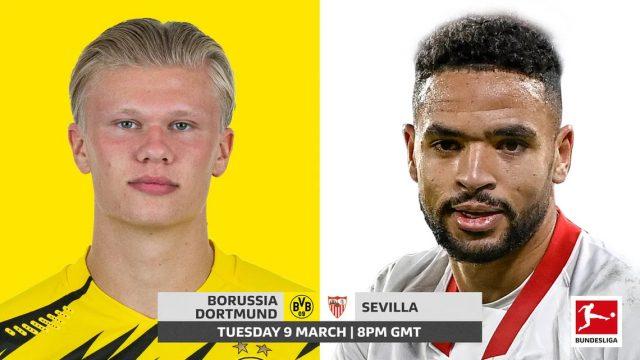 Borussia Dortmund and Sevilla will battle it out for a place in the quarterfinals of the UEFA Champions League when they meet on Tuesday.

The Signal Iduna Park will host the second leg round of 16 tie between the two teams, with Dortmund holding the advantage over the Spanish side.

The Black and Yellows earned a 3-2 win in Spain back in February but their recent injury crisis and their failure to wrap up the tie means Sevilla still have a chance to qualify at the expense of Dortmund.

Dortmund were beaten over the weekend by Bayern Munich after taking a two-goal cushion while Sevilla also suffered a shocking defeat to Elche in the Spanish La Liga as well.

Both teams have everything to play for in midweek and it will be the case of the better side on the night advancing to the quarterfinals of the competition.

Jadon Sancho is expected to be out until at least April due to a muscle injury. Raphael Guerreiro and Gio Reyna are considered doubts for the game but Dortmund are confident of having Erling Braut Haaland available.

For Sevilla, Aleix Vidal is the notable absentee for Julen Lopetegui with first-choice goalkeeper Yassine Bounou expected to return to the starting XI.