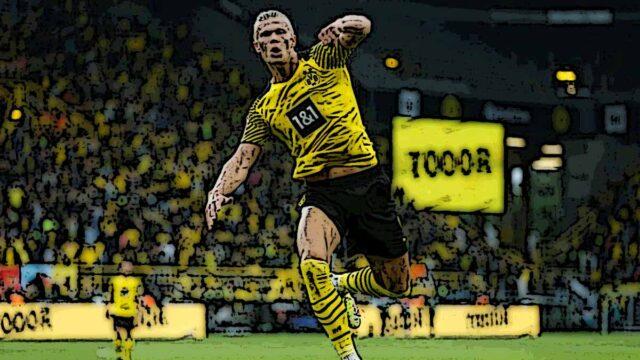 Erling Braut Haaland continued his red hot form to the start of the new season as Borussia Dortmund hit four past Union Berlin on Sunday afternoon.

The matchday 5 fixture between Dortmund and Berlin saw a goal-fest at the Signal Iduna Park with six goals in total being scored.

Haaland was among the goals for the home side who at some point looked to have lost their magic touch in the game.

Dortmund manager just made one adjustment to his starting line to the team that made light work of Besiktas in the UEFA Champions League in midweek, with Axel Witsel being called upon in place of Julian Brandt, who had picked up an injury.

Could have had a worse start to the game but for an offside decision that went against Union Berlin in the opening minute, helping Dortmund to recover from that and take control of the game.

The Black and Yellows dominated the tempo of the game and were rewarded with a goal in the 10th minute when Raphael Guerreiro scored with a volley from a tight angle.

Erling Haaland stepped onto the scene to double Dortmund’s lead 14 minutes later, pouncing on Thomas Meunier’s cross to score his first of the game.

After the first half break, an own goal from Marvin Friedrich made it three for the home side who looked to be cruising to a big win at home.

However, a penalty conceded by Witsel and converted by Max Kruse gave the away side a lifeline before Andreas Voglsammer brought Berlin to within one goal with nine minutes to go.

The substitute climbed the tallest to the ball from a corner to head past Gregor Kobel in post for Dortmund and bring the score to 3-2.

Haaland then scored his second goal on the day to give his side breathing space, latching unto a long ball from Mats Hummels before lobbing it over Andreas Luthe.

The win means Dortmund are back in the third position, just one point behind both Bayern Munich and Wolfsburg, who have 13 points after five games played.