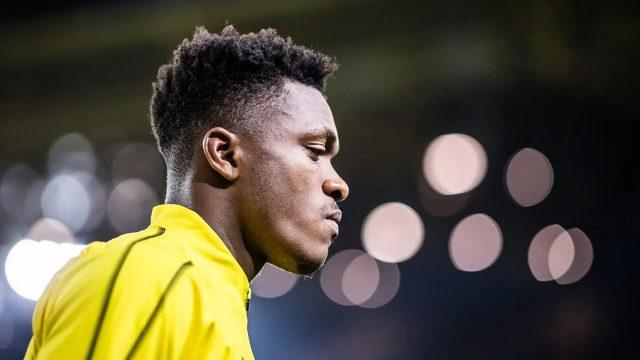 Dortmund announced that Central defender Dan-Axel Zagadou has injured his ligament in his left knee during training.

As all the clubs await for the final decision on whether or not the season will resume. This injury to Dortmund comes as a huge blow for their title challenge.

A statement by the club said,  “Zagadou injured the lateral collateral ligament in his left knee in training and over the coming weeks, Zagadou will work intensively with the club’s rehab coaches in a bid to return to fitness and – provided the coronavirus pandemic allows for it – help his team in the remainder of the season,”

The 20 Year old has been a key player for the German side this season and has emerged as one of the brightest talents in the world.  The French international also featured in Goal’s NxGn list of the best teenage talents in world football in 2018.

Having joined the club from PSG in 2017 the player became a regular in the Dortmund side after the injury to left-back Marcel Schmelzer.

The player has already made 17 appearances for the club this season having scored one goal.

With Dortmund aiming to win their first Domestic league title since 2011-12 the club would be hoping that the player recovers soon. Dortmund sit 2nd in the table 4 points behind defending champions Bayern Munich.

With just 9 games remaining Dortmund would want a full fledged squad for their remaining fixtures.

Dortmund announced the return of players for training in the ongoing Corona virus pandemic.

Dortmund have been holding full team training sessions in pairs to keep the players in good shape once the league eventually resumes.