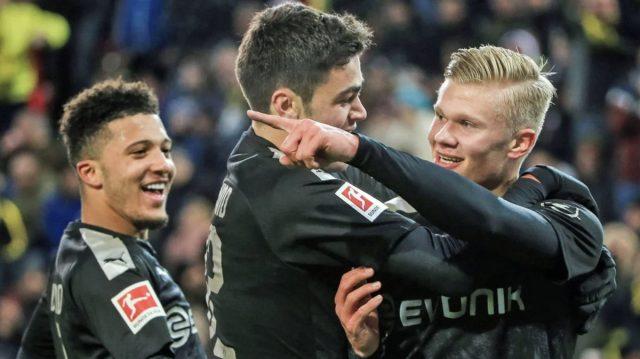 Giovanni Reyna, Borussia Dortmund’s teenage star, made his Bundesliga full debut in the heavyweight clash against RB Leipzig on Saturday. The 17-year-old has been extremely patient as he has already made 13 substitute appearances for the club in the Bundesliga.

In those 13 appearances, Reyna displayed his speed and trickery on the ball, yet he could not garner a single goal or an assist. However, maybe all he needed was a start to produce something quantifiable. In the game against Leipzig, he made the first goal, with a clever short pass in the box to Erling Haaland, who finished it off.

Post-match Haaland revealed the delight he experienced in sharing the pitch with Reyna and the potential which the youngster can fulfil. Haaland said, “Gio is the American Dream, I already called him that before and he still is. He is only 17 years old and is already doing such impressive things on the pitch. He has a great future ahead of him.”

Reyna is the son of two former professional footballers, Claudio Reyna and Danielle Egan Reyna. His performance against Leipzig definitely would have done his parents proud, as he received the highest rating among Dortmund’s midfield according to Whoscored, which assigned him a rating of 7.8.

His performance is a clear indicator of the reliance Dortmund will place on him from time to time. He should be given the chance to start against Hoffenheim in the final game of the season, just to boost his morale and give him more proper game time.