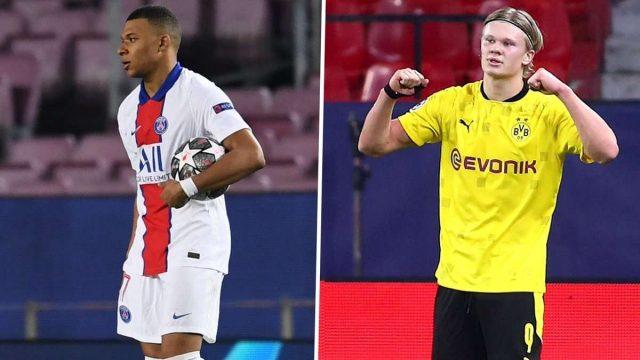 Having seen Kylian Mbappe grab all the headlines with his incredible hat-trick against Barcelona at the Camp Nou, it was the turn of Erling Braut Haaland on Wednesday as Borussia Dortmund played away to Sevilla.

The Norway international was involved in all three goals as his side sunk Julen Lopetegui’s men at the Ramon Sánchez Pizjuan, netting two times and assisting the first goal by Mahmoud Dahoud.

After the game, the 20-year-old revealed his performance on the night was inspired by Paris Saint-Germain forward Mbappe and also added that his side needs to go into the second leg with a good start if they are to progress at the expense of the Spanish outfit.

“We scored three goals and that is important, but we will have to go out and attack [in the second leg]. We have to continue and be solid,” he told UEFA.“I like to play in the Champions League and I was inspired by the three goals that Mbappe scored at the Camp Nou. I thank him. It was a beautiful night.”

Sevilla were handed a lifeline with six minutes to go as substitute Luuk de Jong scored what could be a vital goal for them despite losing at home.

“It wasn’t good that we let in two goals, but it is good to score three away from home and take them with us. We had a good plan,” Haaland said.“Coach Terzic was very good and today I was talking with him a lot with him about the game. He said that today would be my day and that I would have my opportunities and I did.

“It was a really important victory,” he said.