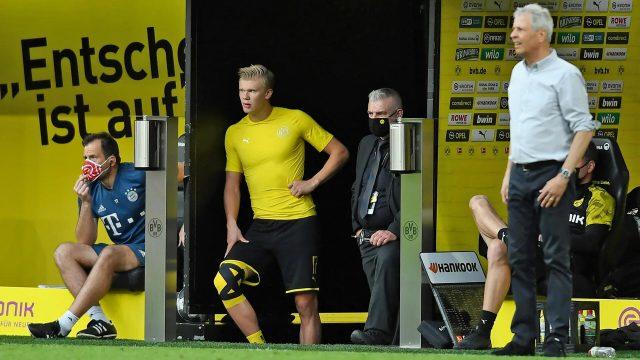 The reputed German media outlet, Bild, has confirmed that Haaland has not taken part in any of the team-training sessions since his injury. Lucien Favre is unlikely to risk his fitness for the sake of one game.

In the game against Paderborn, Borussia Dortmund coped well in his absence by scoring six goals against the bottom-placed team in the league. It is likely that Favre will maintain the same formation against Hertha Berlin, with Thorgan Hazard as the central attacker, and Jadon Sancho and Julian Brandt on the wings.

The game against Hertha Berlin will be significantly more difficult though, as the club has scored 11 goals in the 4 games since the league resumed, and conceded only 2 in the same period. Hertha have kept 3 clean-sheets in the last 4 games, as they progress higher up the table, vying for a place in the Europa League.

Missing Haaland could be detrimental to Dortmund as he has proven to be one of the dominant sources of goals for them. If Dortmund are to break Hertha’s solid defensive line, they would require the front three to be in the same firing form they displayed against Paderborn.

Apart from Haaland, Dortmund will also be without their mainstay in defence, Mats Hummels, who picked up his 5th yellow card of the season, resulting in a one-game suspension.