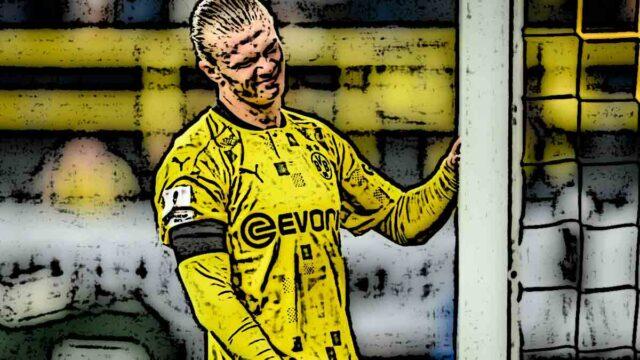 Borussia Dortmund will be without striker, Erling Braut Haaland, when they face Arminia Bielefeld over the weekend in the Bundesliga.

The Black and Yellows will lock horns with Bielefeld in the ninth league game this season, looking to respond positively to the midweek thrashing by Ajax Amsterdam.

However, they will have to do it without the services of Haaland, who has been ruled out for the next few weeks after the striker suffered a hip flexor injury.

The player after his comeback from his last injury was expected to push Dortmund to put in all the fight for the Bundesliga title this season but he will return back to the sidelines a week after his recovery.

Head coach, Marco Rose confirmed the player’s absence during his Friday press conference ahead of the game against Bielefeld on Saturday.

“Erling Haaland will be absent for a few weeks,” Rose said during his pre-match press conference. “He has a hip flexor injury. Erling was really down yesterday. [Haaland] He felt really good after the game against Mainz and did not indicate any problems. He gets all the support from the club and the team. He will spend most of his rehab in Dortmund.”

Though the manager did not reveal how long the player is going to be out, the next weeks ahead will be definitely early to see the Norway international return to action.

Haaland has been prolific for the German club since arriving from Red Bull Salzburg in January 2020. This season has not been any different for the forward as he has netted 13 times in 10 appearances across all competitions for Rose’s team.

Adding to Haaland’s injury, left-back Nico Schluz has also been ruled out by the Dortmund manager due to an injury with the positive news being Dan-Axel Zagadou edging closer to full fitness for the senior team.