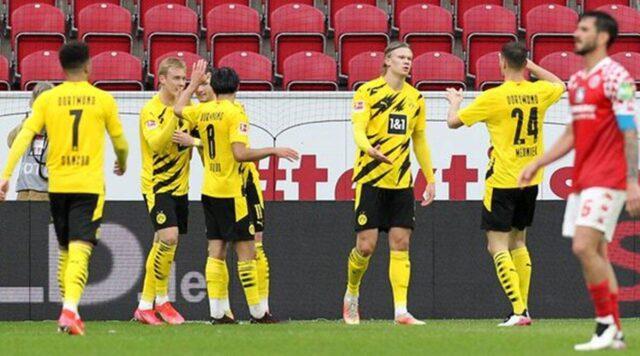 Borussia Dortmund earned their place in next season’s UEFA Champions League with a game to spare following their 3-1 win over FSV Mainz 05 on Sunday.

Goals from Raphael Guerreiro, Marco Reus, and Julian Brandt did the magic for Dortmund while Robin Quaison came from the bench to score an injury-time consolation for the home team.

Having seen Eintracht Frankfurt lose on Saturday to Schalke 04, the Black and Yellows needed all three points to secure their qualification for the 2021/22 Champions League.

Jadon Sancho played a key role for the club in winning assisting the first and second goals to give Dortmund a 2-0 lead in the first half.

The Portugal international curled the ball into the corner of the Mainz goal in the 23rd minute to put the Black and Yellows ahead, having received a pass from Sancho.

Guerreiro and Sancho combined once again moments later but the England international this time found the Dortmund captain who made no mistake tapping into the net from close range to double his side’s lead.

After the recess, Brandt was introduced into the game, replacing Giovanni Reyna. It took just four minutes until the German international registered his name on the scoresheet to make it three-nil.

With just minutes to go, Mainz were awarded a penalty after the ball struck the arm of Thorgan Hazard in the penalty box. Quaison made no mistake and converted to giving the home side a consolation goal.

Edin Terzic’s team are now third on the league table, level on points with Wolfsburg in fourth with a game more to play.