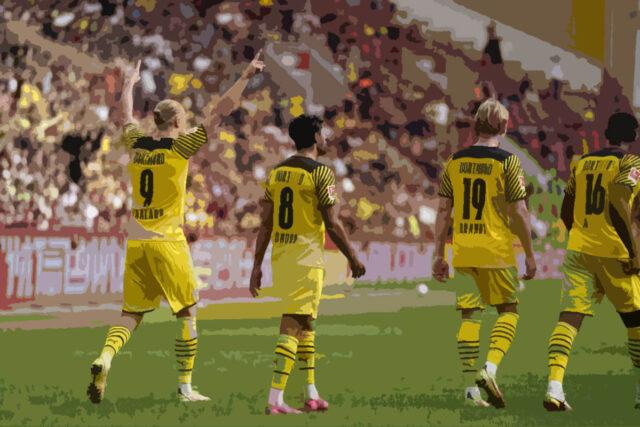 Borussia Dortmund earned a hard-fought victory over Bayer Leverkusen away from home upon their return to club football.

BVB recovered from a poor first half as they returned from the break to record a 3-4 win over their rivals.

Dortmund headed into the game with quite a number of injury concerns including Giovanni Reyna and Thorgan Hazard, but Marco Rose’s line-up was as good a team as anyone would wish for.

Rose, who was celebrating his 45th birthday saw his team go behind twice, but Erling Braut Haaland, Julian Brandt and Raphael Guerriero were on hand to seal the win for Dortmund.

Florian Wirtz opened the scoring on the day after just nine minutes into the game, taking advantage of some passive defending from Dortmund to beat Gregor Kobel in post for the away team.

Despite playing second fiddle to Leverkusen for the majority of the opening half, Dortmund grabbed their equaliser through Haaland who headed in Thomas Meunier’s cross, but Patrick Schik restored the home side’s lead before the break after Jude Bellingham’s strike had been ruled out.

The second half was a thing of a beauty from Dortmund, as Brandt leveled things four minutes after the recess.
Once again, their jubilations were short-lived with Moussa Diaby scoring a third for Leverkusen.

However, two quick goals from Guerreiro and Haaland ensured a dramatic win for the away side who now move into the third position after four games.

Despite the win, Dortmund still has a lot of work to do if they are to stand any chance of challenging Bayern Munich yet again for the Bundesliga title this campaign.