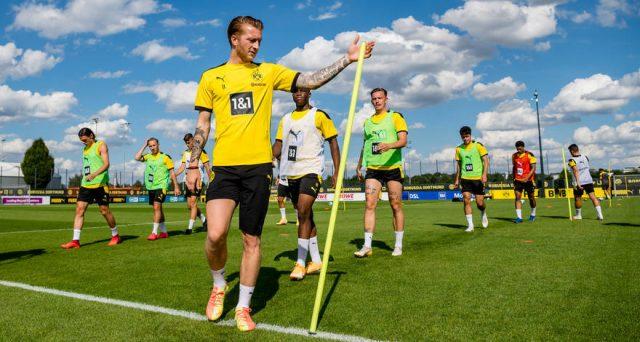 Borussia Dortmund confirmed that Marco Reus has been partially integrated into team training after approximately 7 months out. The Captain sustained a muscular injury in February, and although he did make a return to team training in June, he suffered a setback owing to an inflamed tendon.

Hopefully, the extended recovery time he received will help him make steady progress in team training. Dortmund’s first professional game of the season is against MSV Duisburg in the DFB-Pokal first round on the 13th of September. This gives Marco just over 20 days to reach match fitness.

If Dortmund wants to challenge for the title in the upcoming season, they know that Reus’s skill, as well as experience, will be crucial. In spite of just playing 19 times in last season’s Bundesliga, the German scored 11 times and provided 6 assists. This translates to almost one goal contribution per game, numbers very few can beat in European football. Had he stayed fit for the rest of the season and continued on the same streak, he would have scored around 20 goals and provided 11 assists.

Apart from his obvious skills on the pitch, Reus is a brilliant leader and always gives it his all for the team. This is something which Dortmund lacked in a few games last season, and with Reus as their role model, BVB could go on to achieve great things next season.

In addition to this, Reus would also prove to be a brilliant mentor for the recently signed Reinier Jesus, who is an 18-year-old attacking midfielder from Brazil with a lot of potential.