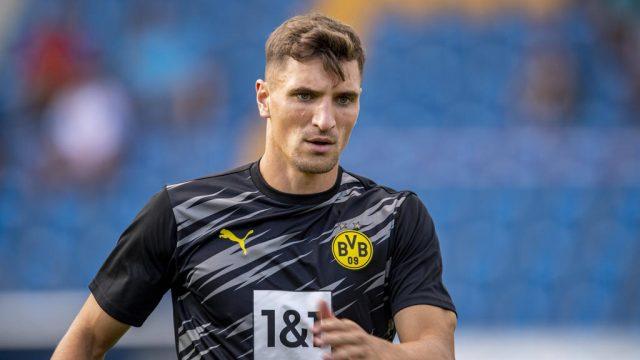 Thomas Meunier injured himself during the club’s 11-2 victory over Austria Wien. It is believed that he picked up a muscular injury when he made his first start for the club. It is reported that he suffered a muscle tear during BVB’s second pre-season game.

Generally, a muscle tear leads to a professional being ruled out for 5-6 weeks of football, and this may be the case for the Belgian too. It is also reported that he has already begun his rehabilitation process. According to Kicker, he has already proved himself to be fit for individual training, hence he may be back with the team within a couple of weeks.

The club’s official tweet read: “Thomas Meunier has suffered a fibre tear n the game against Austria Wien and will have to take a break in the coming days. Today he completed individual rehab training. Get well soon, Thomas!”

Thomas Meunier suffered a slight muscle sprain during our training match vs. Austria Wien and will take time off to recover.

Meunier only joined the club in July on a free transfer from Paris Saint-Germain. The Belgian signed a 4-year contract with BVB as a replacement for Achraf Hakimi. For now, though, Dortmund will want him back as soon as possible as they are already without Dan-Axel Zagadou and Marcel Schmelzer owing to injuries.

BVB kick-start their Bundesliga campaign on the 19th of September against Borussia Monchengladbach. Before that, they will face MSV Duisburg in the DFB-Pokal First Round on the 13th of September. If Meunier can make a return to training before that, he should be fit for both the games. If not, youngster Mateu Morey will step in for him.