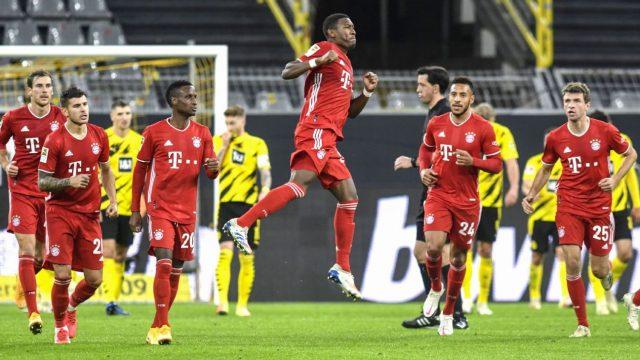 Borussia Dortmund suffered a frustrating 3-2 loss to title-holders Bayern Munich. The Bavarian team took their chances well and were far more clinical in front of goal than Dortmund.

The game was played at an exciting tempo as both sides always looked to attack. Mats Hummels was surprisingly fit enough to start the game, with Axel Witsel slotting back to his preferred midfield role, and Mahmoud Dahoud was dropped to the bench.

Bayern created plenty of chances for themselves in the first 30 minutes of the game, notably Robert Lewandowski’s effort from close-range, which hit the side netting, and Leon Goretzka’s header which was well-saved by Roman Burki.

Joshua Kimmich’s injury in the 36th minute swung the game in Dortmund’s favour, as it was easier to navigate their way through Bayern’s defence with the German off the pitch. This was evident when Marco Reus gave BVB the lead in the 45th minute, when Raphael Guerreiro’s low cross found the skipper who made no mistake with a neat first-time finish.

Just when Dortmund thought they’d go into the dressing rooms with a first-half lead, Munich struck back. The visitors were awarded a free-kick, which they worked incredibly well as David Alaba’s shot took a deflection off Thomas Meunier and nestled into the back of the net.

The Der Klassiker offered even more entertainment in the second half. Robert Lewandowski beat Mats Hummels in the air, to head Lucas Hernandez’s cross beyond Burki and into the far corner. Bayern could have extended their lead to 3-1, however, Kingsley Coman’s long range shot cannoned off the post.

Despite Dortmund’s efforts to get back into the game, Manuel Neuer was at his best to deny attempts from Erling Haaland, Giovanni Reyna, and Marco Reus.

The lack of accuracy from Dortmund eventually cost them when Bayern showed them how it’s done. Leroy Sane, who came off the bench, finished a smooth counter-attack which was led by Lewandowski, who slipped in Sane.

Dortmund were offered some respite from Erling Haaland, who scored his first goal in a Der Klassiker. Guerreiro was provider once again, as his dinked ball over the heads of Bayern’s defence put the Norwegian striker in a 1v1 situation. Haaland rounded the keeper and passed the ball into the net with his left foot.

After the loss, Dortmund find themselves in third place, while Bayern Munich went top of the table, 2 points clear of second-placed RB Leipzig.