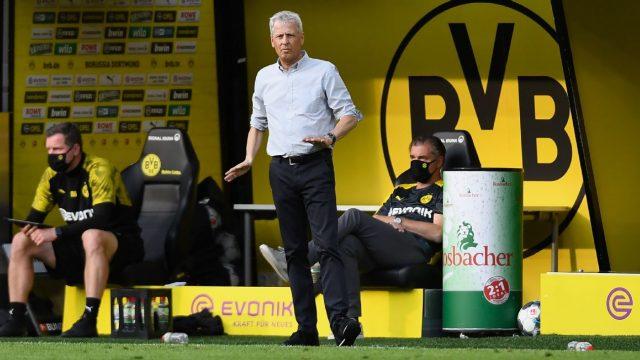 Borussia Dortmund manager Lucien Favre has rues missed chances against Bayern Munich, as he says it will be difficult to catch the league leagues after Tuesday’s defeat.

Dortmund failed to beat Hansi Flick’s side for the second time in the Bundesliga this season after losing 0-1 at the Signal Iduna Park.

Joshua Kimmich’s cheeky lob from just outside the 18-yard-box was enough for Bayern as they extended their lead at the top of the Bundesliga standings.

The loss has done more damage to Dortmund’s title chances that they expected as they now find themselves seven points behind last year’s champions, with the gaffer admitting that it would be unlikely for the Black and Yellows to overtake the Bavaria club.

“We made a very good start in the opening 30 minutes but we sat too deep after that,” Favre explained at his press conference.

“The second half was good too. We had opportunities, but the penultimate or final ball was missing. We at least deserved to draw.

“We played better than we did against Wolfsburg and Schalke.

“It will be very difficult in the title race. Seven points behind with six games [left], that will be brutally difficult.”

Dortmund came into the game at the back of six consecutive wins in the league, while they have maintained a 100 percent record since the Bundesliga returned from suspension, beating Schalke 04 and Wolfsburg.

With six games to go, Dortmund will only need a miracle to surpass a Bayern Munich side who have showed no sign of slowing down.