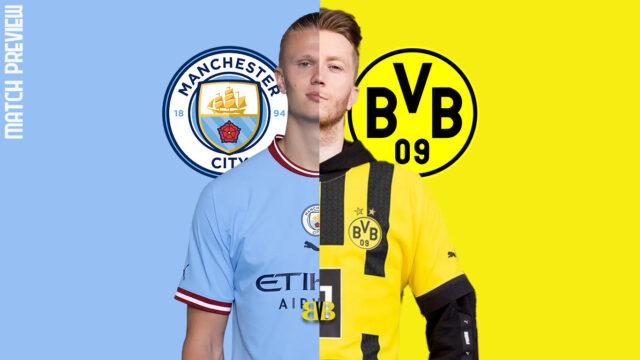 Getting up and going into games with confidence is a craft that footballers have to master, to walk into the most hostile of crowds and stadiums with boos every time your team touches the ball and believe, believe to hold the head up high and get something out of the game, believe to make actions that’d make the travelling supporters and ones on their couches jump from their seats with pride, believe to work something extra-ordinary when all the odds antagonistic towards your aspirations, to do something that gets everyone talking about you, your team, and The Starry Night that has just incurred.

That is the apotheosis of task Borussia Dortmund have at their doors this mid-week when they visit Etihad Stadium to face Pep Guardiola’s Manchester City, possibly Europe’s best as of now and most consistent of the teams there have been in the history of this game. But that is no reason to hang loose and come through without credence, it instead should serve basis to prove the team that we have and announce to the world that the men in Yellow-and-Black are not to be taken for granted, especially after that horrendous of a weekend.

That one was a Saturday to forget, Marco Rose got his revenge and maybe proved that his Dortmund were a spectacle that not many saw. Red Bull Arena was thumping with a sense of pride as Edin Terzić’s men were taken aloof and served for all meals you’d expect. Not to say Dortmund was as bad as that score-line suggests – but it is apparent that the struggle laid in creating high xG chances, despite all the possession – nothing to show for it.

When you want to move on from a loss, what better to have a game in just three day time? – but as initially suggested this is a different game which should be approached with a distinct mindset and a six-sigma approach where even a 0.000339999 defect rate could prove substantial.

Manchester City have a distinct approach to football, where the ball dictates the movements of their players and positional play dictates where that sphere ends up. It’s a mechanical approach, more like how a machine toils itself with a set state of operation. Players already know where the ball is going to end up before receiving it and everything is done with a purpose – be it a fake movement, a feather touch, or a foul, everything.

Over the years, opponents have made an egoistic sacrifices to endeavour a surprise. Letting them control the ball, sit down on a compact low-mid block and corroborate that interiors are shadowed enough for them to recycle the ball AND as soon as they are caught, hit them, hit them hard and fast (on transitions) – make it count before they make amend with what happened. This has worked, ask Tuchel. But this also means that the compact figure of the team should be crack-less.

Edin Terzić is already accustomed to making them suffer with this modus operandi. He nearly got the better of this Pep Guardiola’s side last year, and this could just be that smell of making it happen. When you are about but do something for once, you create a knack, a smell to make do that when the opportunity strikes again. Jude Bellingham played a massive role, taking all of City’s master-squad and beating that press single-handedly at times, while at others – putting in that interceptions and winning the ball back and his tenacity to pick up passes and be on the end of it. Jude will once again be an integral part of the system if Dortmund were to take something from their trip to Manchester.

TAMING THE BEAST THAT DORTMUND MADE:

Erling Haaland has terrified the defenders in England with his fanatical abilities and already has TEN League goals to his name in six games. TEN. Haaland’s involvement is a bit different to other strikers we have seen under Pep Guardiola. The Norwegian’s ability to beat defenders to the passes in-behind defensive lanes has proven harrowing to deal with – complement that with a perfectly weighted Kevin de Bruyne pass and voila you’re cooked.

It needs to be accepted that you cannot keep Erling out of the game, his abilities are going to make you suffer but it’s about keeping him quiet. Frustrating him in the sense that he doesn’t smell an opportunity, and if he does making sure he gets nowhere near it. Easier said then done, especially if the game pans out to be anywhere near that Leipzig one where Timo Werner got best of the pocket space created between centre-backs and made runs that proved troublesome all game.

With Dortmund and Terzić knowing the strengths and weaknesses, especially the latter, of Haaland in the years he has been in North Rhine-Westphalia – it’s time to use that and put out a side and a defensive unit to limit his involvement around the game.

Notably, Manuel Akanji will prove to be a big miss for an occasion like this for Dortmund, he has been a towering presence at Signal Iduna Park for years but this time he will lineup in the sky Blue of Manchester.

Injuries. Thorgan Hazard didn’t even make it to thirty-minutes last time Dortmund played in the Champions League, coming off with thigh problems – he faces a late fitness test to resolve his availability for the fixture. The Belgian isn’t the only one sweating with the nescience of availability, as Donyell Malen and Karim Adeyemi join him in that doctor’s room before boarding to Manchester and face a late fitness test with thigh and foot problems respectively.

None of Gregor Kobel, Sebastien Haller, Mahmoud Dahoud, Jamie Bynoe-Gittens and Mateu Morey will be available as they serve lengthy period on the sidelines.

[Although Ozcan has been an ever-present involvement in the DM role, a possible start for Emre Can there considering his experience in high stake games could be an interesting prospect. Although that would come surprising to many.]