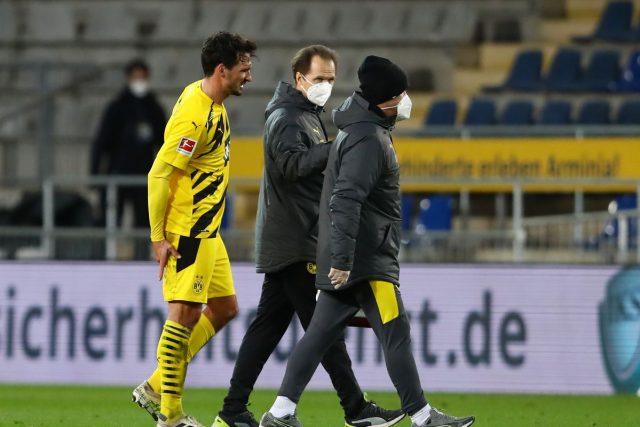 Mats Hummels, Borussia Dortmund’s central defender, picked up a thigh injury in Saturday’s clash against DSC Arminia Bielefeld. This was after the German scored both of BVB’s goals to win the game.

Hummels felt his thigh tighten towards the end of the game and requested to be substituted. In a post-match interview, he clarified what happened to him. He said, “My thigh seized up at that moment. Fortunately, I didn’t feel a twinge, which is at least a good sign.”

The injury is not too serious, however, there is no guarantee that Hummels will play in Wednesday’s UEFA Champions League clash against Club Brugge at the Jan Breydel Stadium.

Hummels said, “The thigh muscle is tight, that’ll have to be worked on for a few days. But I obviously hope to win the race against time for Wednesday.”

If Hummels wasn’t to be fit for the clash, Lucien Favre could be forced to resort to a centre-back pairing of Manuel Akanji and Lukasz Piszczek, as Emre Can and Dan-Axel Zagadou wouldn’t be available.

Sporting Director, Michael Zorc, confirmed that a decision on Hummels’ availability cannot be made yet.