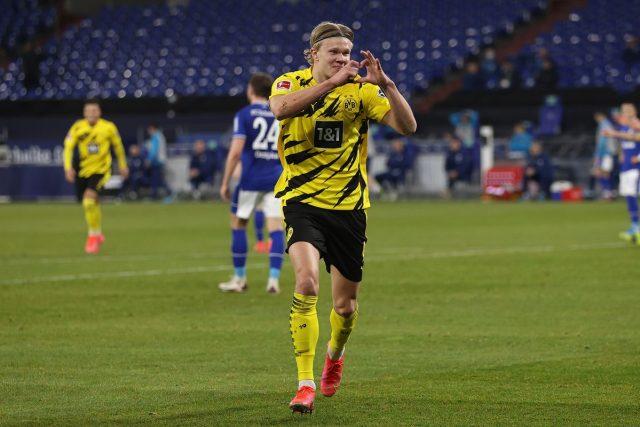 Super agent Mino Raiola has claimed Erling Braut Haaland is enjoying life at Borussia Dortmund at the moment while refusing to be engaged in conversation of his client’s release clause.

The prolific striker has been a huge investment for Dortmund, making a great impact at the club so far during his time at the Signal Iduna Park.

His number of 33 goals in 32 games has attracted the interest of the big teams in Europe including both Manchester clubs, Chelsea and Real Madrid.

But Raiola says the player is happy with the Black and Yellows, heaping praise on the 20-year-old’s competitiveness and mentality since moving to Germany. Raiola also likened the Norway international to Zlatan Ibrahimovic.

“Erling Haaland is like a painting, he is like Munch’s Scream because he causes fear in the defenders. He called me after being substituted in the 85th minute, he had scored four goals, he wanted to score another. He was furious! He wants to be the best even if he’s playing checkers.”

Reports have claimed that the youngster has a release clause in his contract at Dortmund which can only be activated in the summer of 2020 but the agent did not want to talk about that. However, he said that when Haaland leaves for Borussia Dortmund, it will be for ambition and not money.

“I can’t talk about Haaland’s release clause. Rumors say that Real Madrid want him? This is not new to me. But he is very happy with Borussia Dortmund. Erling wants to win the UCL. When he’ll leave the club, it will be for his ambition and not for money.”