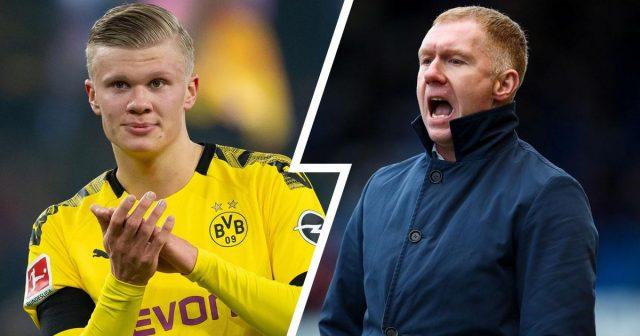 Manchester United was the primary club tipped to sign Erling Haaland in this season’s January transfer window from RB Salzburg. However, owing to a mismatch in valuation and a breakdown in communication between the club and the Norwegian’s agent, the deal fell apart.

Instead, it was Borussia Dortmund that signed him from Salzburg for a modest fee of 18 million Pounds. Although Manchester United have been in fine form of late, ex-Manchester United midfielder, Paul Scholes, has criticised the club’s decision not to sign Haaland. He said, “Once the German football came back, and I watched him properly, I thought, Why did Manchester United not just pay whatever anybody wanted for him?”

Haaland was expected to reunite with his former manager, Ole Gunnar Solskjaer, at Manchester United.

Scholes added, “He looks that good, he’s still young, and he’s an out-and-out goalscorer. He’s quick as well, he’s got real pace. He’s a big lad, he’s a presence, and he scores goals – and that’s priceless.”

Erling Haaland has been crucial to Dortmund’s Bundesliga season. Without him, they may not have secured the runners up spot on the table. He has scored 13 goals in his first 15 Bundesliga appearances and was even nominated for the Player of the Season, despite only making 15 appearances.

Scholes even spoke of the possibility of a future transfer to Manchester United. He said, “Looking back – and do you know what, he still might be available, who knows, in time – but United are going to have to pay big, big money for him. But so what? He looks the real deal.”

Although this may not happen in the near future, if Dortmund fail to put up a fierce fight against Bayern Munich for the Bundesliga, Haaland will be tempted to leave.