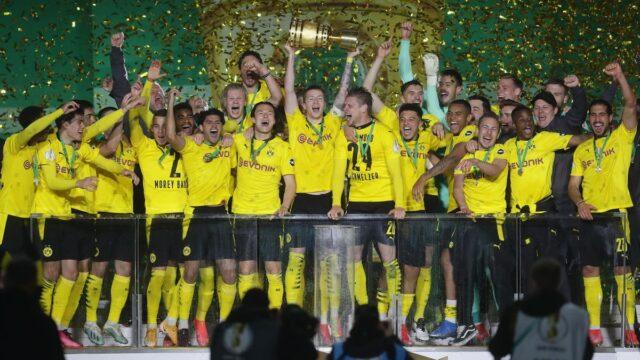 Borussia Dortmund secured silverware for the 2020/21 season after beating RB Leipzig on Thursday night to clinch the DFB Pokal title. That title was also the first Dortmund have won the trophy since 2017.

Edin Terzic’s men run riot at the Olympiastadion in Berlin to lift the trophy for the fifth time, with two goals each from Jadon Sancho and Erling Braut Haaland while Dani Olmo scored Leipzig’s only goal.

Jadon Sancho broke the deadlock in Berlin in the fifth minute of the game, cutting in on his right before bending the ball past the Leipzig goalkeeper to give his side the lead.

Erling Haaland doubled Dortmund’s lead just before the hour mark, out-muscling Dayot Upamecano in the 18-yard box to put the ball into the net for his first of the night.

Roman Burki didn’t have much to do in the opening 30 minutes of the game with Dortmund doing almost all of the attacking.

Their efforts paid off once again before the half-time whistle, as Marco Reus‘s pass needed just a tap in from Sancho to make things difficult for Julian Nagelsmann’s team.

There was some optimism of a comeback for Leipzig after Olmo pulled one back for them in the 71st minute but that was all they could manage on the night.

However, Haaland put the game to close moments later with three minutes to go through a mishit effort to seal the victory.

Dortmund will now turn their attention to the last two league games of the season, needing two wins to ensure that they qualify for UEFA Champions League football next season.