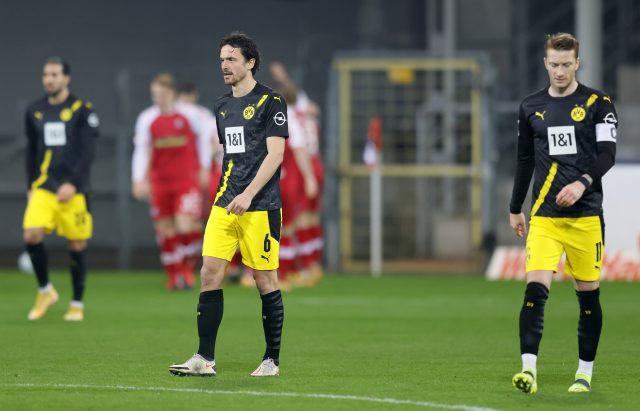 Borussia Dortmund were handed a shock defeat on Saturday, following their 1-2 loss to SC Freiburg in the Bundesliga.

Dortmund’s late attempts to try and salvage a point could only see them pull one back after going two goals down.

Having ended the first 45 minutes goalless, it was SC Freiburg who opened the scoring in the 49th minutes through Jeong Woo-Yeong, who made no mistake after receiving the ball from midfielder Vincenzo Grifo.

The home side’s lead was doubled three minutes later after the opener when right-back Jonathan Schmid scored his first goal of the 2020/21 campaign.

Throughout the entire 90 minutes, the Black and Yellows attempted a total of 16 shorts, but it was only six of those which went on target – one of them being the consolation goal scored by substitute Youssoufa Moukoko.

Dortmund’s league run has been quite inconsistent this season since the opening day and will have to pick themselves up if they were to challenge for the league title with time.

With 20 games played already, they are languishing in the sixth position with just 32 points, just ahead on goal difference above Borussia Mönchengladbach.

SC Freiburg on the other have risen to the eighth position after their win over Dortmund and will hope to build on the results in their next league games.