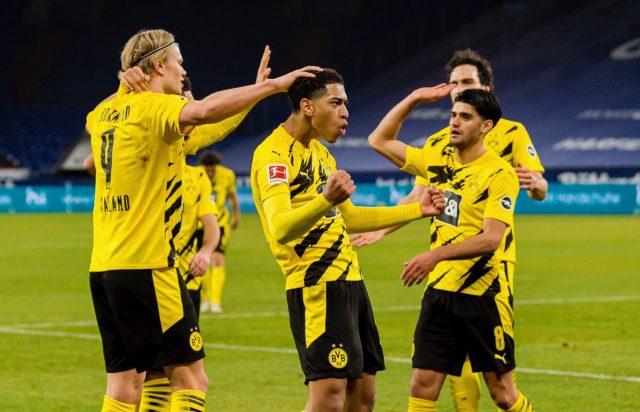 Borussia Dortmund followed up their impressive performance in midweek over the weekend with an extraordinary victory against Schalke 04 in the Revierderby.

Edin Terzic and his side capitalised on Schalke’s bad performances lately, handing them a humiliating defeat at their own home ground.

Erling Braut Haaland scored twice with Jadon Sancho and Raphael Guerreiro also adding up to the numbers as Dortmund won by four goals to nil.

The England international opened the scoring for the away side on the 42nd-minute mark, curling the ball into the top right corner of the post after Mateu Morey’s press led to a defensive error.

Haaland doubled the Black and Yellows lead three minutes later with a wonder goal after being supplied by Sancho.

Marco Reus recorded his fifth assist of the season, turning the provider for Guerreiro who made no mistake adding a third for the away team.

Jude Bellingham also came from the bench to assist Haaland once again to complete the demolition.

Schalke recorded just two shots on target throughout the game and the loss means they are still bottom-rocked on the league table maintain their sixth position.