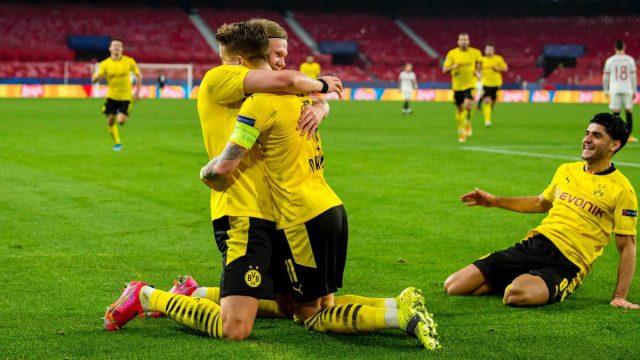 Borussia Dortmund returned to UEFA Champions League action in fine form on Wednesday, when they played Sevilla in the first league of their round of 16 tie.

The Black and Yellows have been the subject of some inconsistencies in their league performances lately, with just one win in their last six games in the Bundesliga.

However, first-half goals from Mahmoud Dahoud and Erling Braut Haaland were enough to give the German side a clear advantage over their Spanish counterparts.

Sevilla opened the scoring in the seventh through former AC Milan winger Suso but after brilliant work from Haaland, Dortmund got their equaliser with a well-struck goal from Dahoud 12 minutes later.

Haaland was involved once again before the 30th minute-mark, starting the attack before striking the ball past Bono in goal for the home side.

Edin Terzic’s team went into the break with a 3-1 lead as Haaland grabbed his second goal on the night before the half-time whistle.

Julen Lopetegui was forced to make all five substitutions between the 46th and 70th but his substitutes could only play a role in closing the deficit as Luuk de Jong scored on the 84th minutes.

The results give Dortmund a little advantage over Sevilla with the three aways goals poached and they will have to be careful not to allow the Los Palanganas too much space when they host them in two weeks’ time.