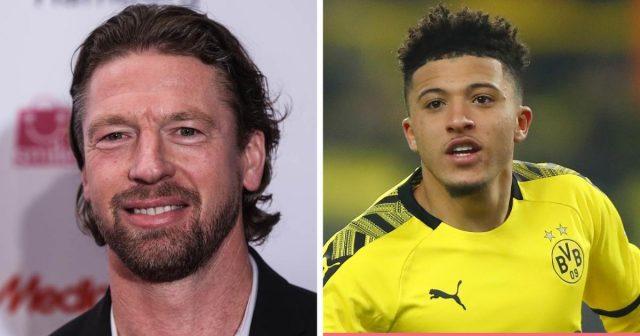 Steffen Freund has warned Jadon Sancho about the possibility of moving back to England, as he feels it’s too early.

Sancho has been linked with a move to Chelsea, Liverpool and Manchester United after impressing with his performances for Borussia Dortmund.

However, the former Black and Yellow midfielder has warned the England international against a possible move to any of the English teams likening the situation to that of Luka Jovic, though he believes Sancho is good enough for any of the teams.

Jovic moved to Real Madrid last summer in a €60 million deal after a fruitful campaign with Eintracht Frankfurt, but has failed to make any impact in his maiden season in Spain scoring just two goals in as many appearances for the club.

Freund has concerns for Sancho as he fears the player’s career could follow same path should he make an early move to the English top-flight.

“Jadon is ready to play for Liverpool or Man United, no question, because his stats are unbelievable. That shows that he can take the next step,” he told talkSPORT.

“In the Borussia Dortmund side with [Erling] Haaland, [Julian] Brandt improving, with Emre Can signing, with changing to a back three – that suits Sancho. It would be good for him to play for Borussia Dortmund now and next year so that he will have more match time.

“Remember Jovic, who moved to Real Madrid from Eintracht Frankfurt – he’s not playing. If you have an offer from Real Madrid you think, ‘I have to go’.

“No, you don’t have to go because the salaries in the Bundesliga are on a good level, too – not as much as Real Madrid or the Premier League, though. But you can earn good money and improve and not make too much of a big step at once.

“So, for Jadon to move to Man United with that pressure, they are struggling to qualify for the Champions League, so maybe it’s better to stay another year in Dortmund.”

Freund said interested parties should stay back making an offer for the player until at least Dortmund are forced to cash-in.

“If the offer comes in and the people from Borussia Dortmund think it’s right then they will sell him,” he said.

“With the coronavirus, if something goes wrong in the Bundesliga and we can’t see football until the end of the year, then it’s not the right moment to talk about players, they cost so much money.

“I think the price will drop anyway. All the clubs in Germany are losing a lot of money. It’s not the same without money from tickets and sponsors and so it’ll be difficult to keep your best players.”