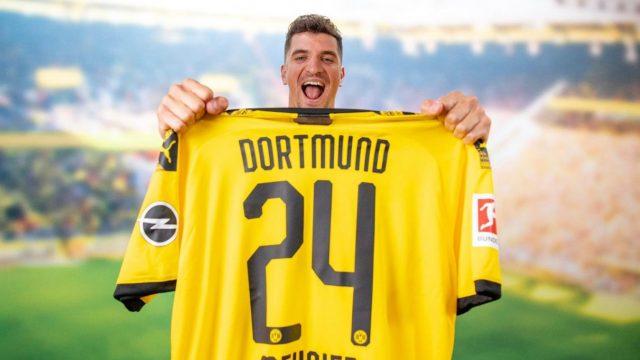 Borussia Dortmund have officially confirmed the signing of Thomas Meunier from PSG on a free transfer. The Belgian right-back’s contract at PSG expires at the end of June, which will make him a free signing.

Meunier opted against a short-term contract extension at PSG, and instead chose to move to this year’s Bundesliga runners-up, Borussia Dortmund. He has spent 4 years at PSG, and with the club showing no indication of any long-term future for him in France, he decided to move to Dortmund.

Meunier has signed a four-year contract with Dortmund which will expire at the end of the 2023/24 season. Borussia Dortmund’s Managing Director, Michael Zorc, said “Thomas Meunier is a player who has proven his quality at the highest level, among other things in the Champions League and in the national team, over a long period of time and will give us a real boost with his experience.”

The Belgian was delighted with his move to Dortmund, and in an interview with the club, he said “Borussia Dortmund play exactly the type of football I want to play: exciting, authentic and natural. BVB are known for their enthusiastic fans, and the atmosphere during the match with Paris at the SIGNAL IDUNA PARK influenced my decision if I’m honest. I am ambitious and I want to win titles with Dortmund, as I have done in Brugge and Paris.”

This is Dortmund’s first official signing for next season, with Jude Bellingham likely to be their next target. Meunier is likely to take Achraf Hakimi’s spot at right-wing back next season, as the Moroccan will go back to Real Madrid on the completion of his loan at Dortmund.