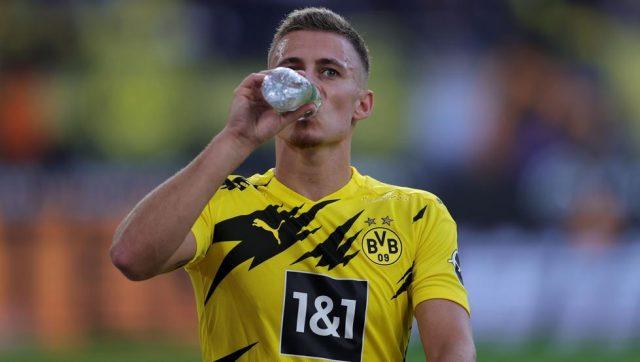 Borussia Dortmund forward, Thorgan Hazard is out for several weeks after suffering another muscular injury. The Belgian had just recovered from one muscular injury and was reintroduced into the squad for the second round of the DFB-Pokal Cup game against Eintracht Braunschweig.

Hazard came on towards the end of the game but was forced off the pitch when he pulled his hamstring. Hazard limped around the field for a while but came off the field when Jadon Sancho scored the second goal in stoppage time.

After the game, Edin Terzic confirmed the nature of the injury. He said that Hazard, “Unfortunately, suffered a muscle injury“. The next day the club confirmed on their website that Hazard will be out for several weeks, offering no specific timeline on his recovery.

Hazard’s previous muscular injury forced him to miss Dortmund’s three most recent games in the Bundesliga against VfB Stuttgart, Werder Bremen, and Union Berlin. It seems like the match-time against Braunschweig has caused an aggravation to the injury.

On a positive note, Erling Haaland’s recovery from injury is going according to plan. Manager, Edin Terzic said, “We are glad that Erling is back. He is completely on target and we assume that he will be back at the beginning of January.“