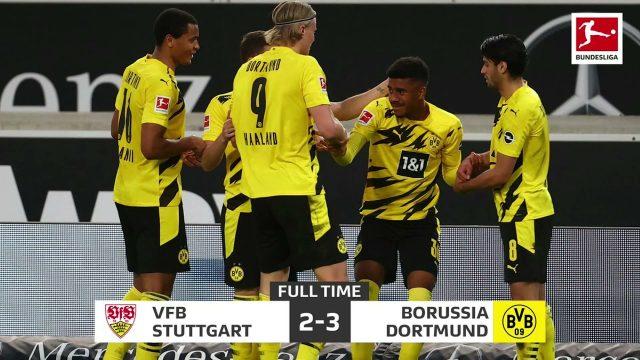 After a run of three games without a win across all competitions, Borussia Dortmund returned to winning ways over the weekend.

The Black and Yellows lads beat VfB Stuttgart in a thrilling game that ended 3-2 at the Mercedes Benz Arena.

Jude Bellingham, Marco Reus and substitute Ansgar Knauff were all on target for the away side as they came back from a goal down to clinch all three points.

Sasa Kalajdzic gave the home side the lead inside 17 minutes when Marwin Hitz misjudged the striker’s header.

Despite playing three out of their 10 shots on target, Dortmund went into the break trailing and needed to do something special to salvage at least a point.

Just two minutes into the second half, Giovanni Reyna proved crucial as he assisted Jude Bellingham for Dortmund’s equaliser and the England international’s first Bundesliga goal.

Reus made it 2-1 for Edin Terzic’s side some minutes later as they chased their chances of making the top four.

A good combination between Tanguy Coulibaly and Daniel Didavi saw the host draw level with 12 minutes to go.

Knauff, who had come on earlier for the injured Reus earned the hero of the night status after his well-curled low shot beat the goalkeeper of Stuttgart to restore Dortmund’s lead.

Dortmund are still seven points off the top four places and will have to ensure that teams above them drop points while they keep to winning their games.