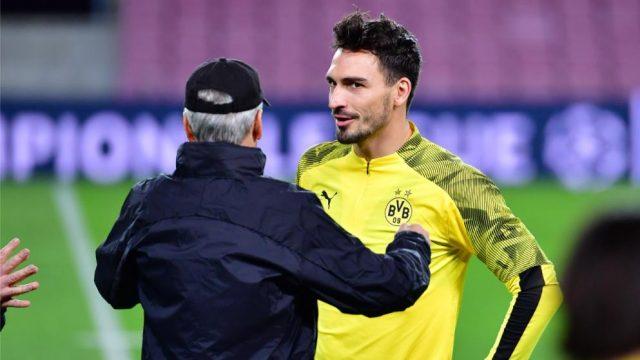 Under Lucien Favre, Borussia Dortmund have tried out different tactical formations, and just as the team settled into a 5-2-3/3-4-2-1, the Swiss Manager is tempted to revert to a back four. He said, “The 3-4-1-2 system is good, I like it, but I personally prefer the 4-3-3. My favourite system is and remains a 4-3-3.”

But what is the better option for BVB? Let’s discuss:

Lucien Favre first tried out this formation in the 2-1 victory against Hertha Berlin on 30/11/19. The back 5 composed of three natural central defenders in Mats Hummels, Dan-Axel Zagadou, and Manuel Akanji. The other 2 were fullbacks, Raphael Guerreiro and Achraf Hakimi, who were converted to wing-backs.

Reasons to stick with this system:

Attacking freedom for the wing-backs: There’s no question that after switching to the 5-2-3 in the latter half of the 2019/20 season, Achraf Hakimi and Raphael Guerreiro turned into different animals. Hakimi finished the season with 10 assists, whereas Guerreiro got his name on the score-sheet 8 times. The system allows for more width for the wing-backs and helps them use their attacking instincts to the best of their ability.

Lukasz Piszczek’s role: BVB have often been short of central defenders owing to fitness issues. Hence, when Dortmund switched to 3 central defenders at the back, it gave their former Vice-Captain, Piszczek, the opportunity to deputise for the injured central defenders. The former Polish International is now 35 years of age, and instead of running up and down the wing from the fullback spot, he can now focus on the defensive aspect to his game.

Fitting Jude Bellingham in: Jude Bellingham is accustomed to playing in a central midfield duo for Birmingham City. Hence, making the 17-year-old adjust into a midfield 3 may not be the right call for him right now.

Reus, Sancho, Haaland in tandem: The only time Marco Reus, Jadon Sancho, and Erling Haaland all started in the same game was against Union Berlin in a 5-0 victory in February. All three of them got on to the scoresheet. If Dortmund want to take their title charge to the next level this season, the trio of Reus, Sancho and Haaland up top would boost their chances massively.

Dortmund are accustomed to having Axel Witsel and Emre Can in the centre of midfield, providing the perfect balance between defensive solidity and attacking initiative.

Raphael Guerreiro recently opened up on why he prefers the back three set-up. He said, “I prefer playing with a back three. That gives me room to get forward, and there’s always someone behind me to provide cover.”

Out of the 5 Borussia Dortmund pre-season fixtures, Lucien Favre chose to use the 4-3-3 system thrice and 5 at the back twice.

Out of the three times, the 4-3-3 system was used, it resulted in an embarrassing defeat to VfL Bochum, a 1-1 draw to Paderborn, and a victory over SC Altach.

Whereas on the two occasions the five at the back were used, BVB came out on top both times. The first was the 11-2 smashing win over Austria Wien, followed by the most recent 2-1 victory over Sparta Rotterdam.

The only hindrance to the back five system is fitting Thomas Meunier into the side. The Belgian international used to play for PSG as a right-back in a back 4. However, with time, Meunier will eventually get used to his role as a wingback.