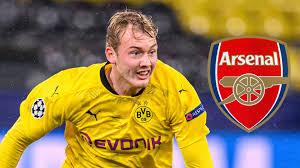 Out of favour Borussia Dortmund attacking midfielder, Julian Brandt has recently been linked to Arsenal. The German has started only 10 games this season across all competitions.

In a time where Dortmund have suffered numerous injuries, Brandt would have expected to play more frequently. However, that hasn’t been the case. The likes of Marco Reus, Thorgan Hazard, and Jude Bellingham have been chosen over Brandt in most of the important games.

Brandt’s fortune hasn’t changed much since Edin Terzic took over from Lucien Favre. In the three games under the new caretaker manager, Brandt has been given only 1 start, that being in the second round of the DFB-Pokal Cup.

Although Brandt has made an appearance in every single professional game that Dortmund have played, he has scored only 1 goal and managed 1 assist in all 22 games.

When we compare this to his stats from last season, there’s an evident drop in form for Brandt. In 2019/20 he managed 7 goals and 13 assists in his 42 appearances for BVB. A midfielder who impressed fans in his first season for the club has failed to keep up the standards.

Having fallen out of favour at Dortmund, Brandt may be looking for a new challenge, and a Premier League club like Arsenal may be a suitable destination for him. Mikel Arteta’s men have struggled this Premier League season and are on the search for a creative midfielder to reignite their hopes this season.

According to the Athletic, Brandt has been considered as an option for Arsenal to sign. So, what do you think? Should Brandt stay or leave to North London?