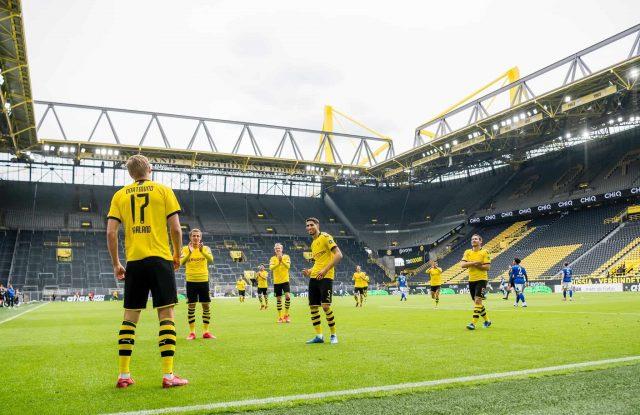 Having secured a vital first-leg advantage in the UEFA Champions League tie against Sevilla on Wednesday, Borussia Dortmund will hope to follow that up with a win in the Revierderby.

They play away to Schalke 04 who have been quite poor all season and lie in the bottom position of the league table with just nine points after 21 games.

Edin Terzic set up his team to play some counter-attacking football against the Spanish outfit but Saturday could be different looking at how Schalke plays a different system compared to Sevilla.

Here is how we think the interim manager will likely assemble his squad for Saturday’s game;

Roman Burki, having missed the last few games through a shoulder injury is in line to return to the starting lineup for this one. The 30-year-old has only managed four clean sheets in 16 league games.

The return of Thomas Meunier will mean that he replaces Mateu Morey in the starting lineup. Raphael Guerreiro will continue at left-back while Mats Hummels and Manuel Akanji partner each other in central defence.

Julian Brandt started from the bench in the win over Sevilla but has been tipped to return to the first eleven for the derby -playing alongside Jude Bellingham and Emre Can.

The trio has contributed to 36 goals in the league this season and with Thorgan Hazard looking doubtful, there could be no changes to the front three. Jadon Sancho, Erling Braut Haaland and Marco Reus are expected to start.