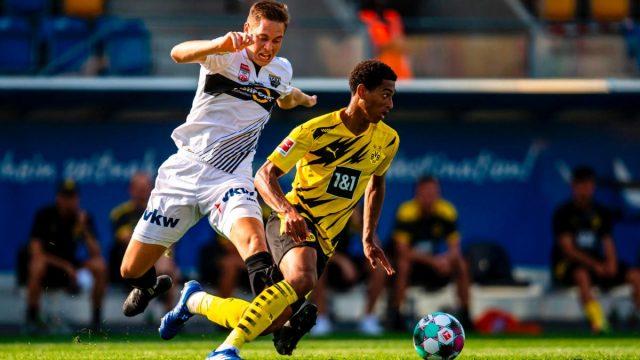 Borussia Dortmund came out 6-0 winners against SC Altach in the first pre-season friendly of their training camp in Bad Ragaz, Switzerland. Dortmund outplayed their opponent in all aspects on the field, leaving no respite for the Swiss team. The goalscorers on the day were: Erling Haaland (2), Giovanni Reyna, Thorgan Hazard, Emre Can, Julian Brandt.

Jude Bellingham made his first appearance for Dortmund and was so impressive that the price-tag Dortmund paid for him seemed very reasonable. He was the primary source for inspiration and showed this through his desire off the ball and craft on the ball.

In fact, it was Bellingham’s high-intensity pressing which set up the first goal. He won the ball back in the attacking third, passed it to Erling Haaland, who played Giovanni Reyna through on goal. The American calmly slotted the ball through the keeper’s legs.

Dortmund continued to dominate the first half, with Jadon Sancho continuously penetrating into the opposition’s half. The second goal came through a left-footed penalty by Erling Haaland in the 36th minute. After winning the penalty himself, the Norwegian striker sent the keeper the wrong way from the penalty spot.

Altach were hoping to enter the second half with no more goals conceded. However, Erling Haaland had other plans on his mind. A low cross from the left was brilliantly flicked on by Jude Bellingham straight into the path of Haaland. The “roadrunner” simply tapped the ball into the net to give Dortmund the 3-0 lead.

Lucien Favre stuck to customary pre-season traditions and sent out an entirely different playing eleven for the second half. This didn’t slow down Dortmund though, as they scored another 3 goals in the second 45′.

Although the first 30 minutes of the second half may not have been as intense as the first half, it was the perfect opportunity for Thomas Meunier to adjust to his teammates’s style of play.

In the 75th minute of the game, Dortmund were handed another penalty after SC Altach’s goalkeeper brought Thorgan Hazard down in the box. Hazard stepped up and sent the keeper the wrong way.

Just 10 minutes later, it was Emre Can’s turn to get onto the scoreline. It seemed far too easy. Can was left all alone in the middle of the 18-yard box. Meunier played a simple ball to him, from where Can swivelled and dispatched the ball into the net.

To make matters worse for Altach, Julian Brandt scored in the last minute of regular playing time. Raphael Guerreiro played him in with an exquisite through-ball, followed by which Brandt finished well.

On another day, Dortmund could have scored a lot more. SC Altach will consider themselves lucky, as it was BVB’s first pre-season game. The brightest aspects of the game have to be Jude Bellingham and Thomas Meunier’s impressive debuts, as both of them bagged an assist each.

Lineups for both halves: