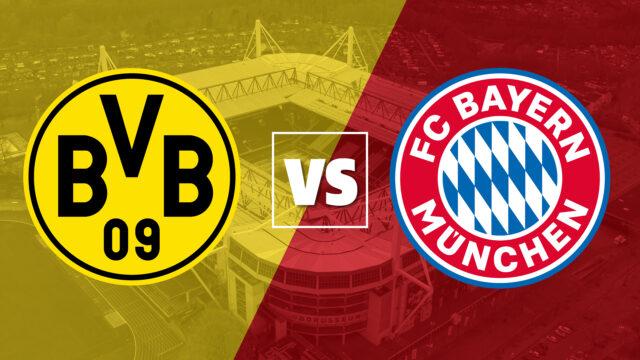 It will be a top-of-the-table clash when Borussia Dortmund hosts Bayern Munich in the Bundesliga on Saturday, December 4.

Just one point separates both teams with Bayern taking 31 points from 13 games while Dortmund have amassed 30 points from the same number of games.

BVB come into the weekend’s encounter at the back of a convincing 3-1 win over Wolfsburg away from home, where they had to come from behind to seal all three points.

Bayern on the other hand managed a slim victory over Arminia Bielefeld in their last league outing with Leroy Sane scoring in the 71st minute to give his side an all-important win.

The last meeting between these two sides saw Bayern beat Marco Rose’s men to lift the German Super Cup back in August.

The Black and Yellows have failed to beat Bayern in their last five attempts in the Bundesliga. They last beat the Die Rotten side in the 2018/19 season with a 3-2 scoreline at home. Aside from league meetings, Dortmund also defeated Bayern 2-0 to win the 2019 German Super Cup.

In their last five meetings at the Signal Iduna Park, Dortmund has only failed to score against Bayern on just one occasion.

Rose has confirmed there will be no injury returns for the game against the league leaders. Though Giovanni Reyna has had his return from his injury, his fitness level is not the best for this game.

Jude Bellingham is expected to feature after training with the team all week while Thorgan Hazard is yet to recover from testing positive to coronavirus.

Julian Nagelsmann also has quite a number of players absent for Saturday’s game. Joshua Kimmich, Eric Maxim Choupo-Moting, Marcel Sabitzer, and Bouna Sarr are all on the treatment table. Leon Goretzka could be given a substitute appearance by the manager.