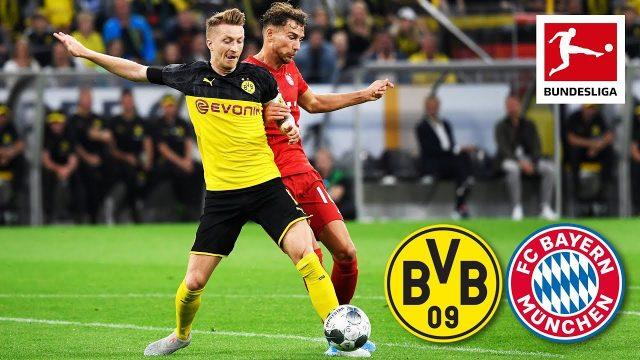 The most awaited fixture of the year is here! The Der Klassiker, between Borussia Dortmund and Bayern Munich, will be played at the Signal Iduna Park. The 2 clubs are level on points, with Bayern on top of the table on better goal difference.

Both clubs have won their last 4 games in the Bundesliga. The clubs also played in mid-week UCL football, as they both emerged victorious in fine fashion. (Borussia Dortmund 3:0 Club Brugge, Bayern Munich 6:2 RB Salzburg)

Borussia Dortmund: Emre Can returned to team training, after recovering from his injury, however, he is unlikely to get back to the starting eleven straight away.

Mats Hummels is still a doubt after he picked up a thigh strain in last weekend’s game against Arminia. If he isn’t ready on time, Axel Witsel is likely to step in for him, just like he did vs Club Brugge.

Defenders, Marcel Schmelzer and Dan-Axel Zagadou will not be available owing to their long-term injuries.

Bayern Munich: Bayern will be without central defender, Niklas Sule, who tested positive for COVID-19, and is currently self-isolating. The same applies to forward, Joshua Zirkzee.

Alphonso Davies is out with a long-term ankle injury, meaning either Bouna Sarr or Lucas Hernandez will take his place at left-back.

Leon Goretzka, who missed the mid-week clash against RB Salzburg, is expected to return to the starting XI after recovering from a slight calf muscular strain.

The 2 sides met earlier this season in the DFL-Supercup when Bayern came out on top in a tense 3-2 win thanks to a late goal from Joshua Kimmich.

Bayern won both of last year’s Der Klassiker clashes in the Bundesliga. The fixture at the Allianz Arena was an embarrassing defeat for Dortmund when Robert Lewandowski scored twice in a 4-0 defeat for the Black and Yellows.

The return fixture at Dortmund’s home ground was less embarrassing but equally painful as the 1-0 loss effectively ended their title run.